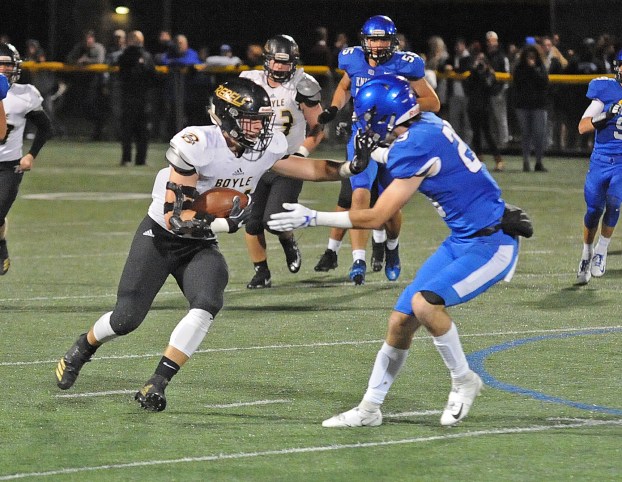 LEXINGTON — It didn’t take long for Boyle County to show it meant business at Lexington Catholic on Friday.

The Rebels stuffed Catholic’s opening drive and then marched down the field for a touchdown, the first in a dominant 40-14 performance that puts Boyle at the top of 3A’s fourth district.

“It was a really good win for our team at this stage,” head coach Chuck Smith said. “We’ve still got to finish the deal next week to put ourselves in really good shape. It’s going to help us in the playoffs, but we’ve still got a long ways to go.”

“We just felt like we needed to come out here and take districts,” Ezarious Roller said. “We’ve been talking all year about a four-game gauntlet and we made it three tonight.”

Roller played a critical role in the Rebels’ success — he scored a touchdown on offense, had three sacks on defense and forced a fumble on the goal line before halftime.

He and teammate Aaron Hatter — who returned to action after a suspension — combined for six sacks and made a living in the Knights’ backfield.

“If we can make them one-dimensional, we felt like it would be a lot easier to defend them tonight,” Roller said. “That was our gameplan this week and we executed it tonight.”

Part of Boyle’s success stemmed from returning players — Hatter was back, starting lineman Wilson Kelly missed last week due to illness and Reese Smith returned to the starting lineup after missing games due to a hand injury.

“It feels good to be back,” Reese Smith said. “Of course this was a real big game to be back. I wanted to be back. It started out fast because I hadn’t played in a couple of weeks, but when the game got a little under control and I got a feel of the game, it worked out. I feel like I was my normal self and I was more comfortable playing.”

Coach Smith said it was important to get players back into the lineup, and not only for the skill they bring to the table.

“It’s really big to get those guys back, they’re a big part of our football team,” the coach said. “It’s hard when they’re not out there, it makes us gel together when they are out there because they’re the leaders of the team, too. It makes a big difference.”

The team made it a point to get Reese Smith involved in the game early. On the Rebels’ first play, he took a handoff for a 17-yard gain. The Rebels would score on their first drive, a run from Landen Bartleson.

“We worked on that all week, worked on trying to get me the ball other than just throwing it because they knew I had a cast on my hand,” Reese Smith said. “They knew I could still catch it but we had decided to get me involved, we’d do more running. I was fine with that as long as I got the ball.”

Even with the cast, Reese Smith caught a 66-yard touchdown pass from quarterback Reed Lanter on the next drive. A play-action left Reese Smith wide open in the middle of the field for a score.

Lanter stayed busy in the first half, throwing a dart to Drew Baker from 11 yards out for the next score. The Rebels led 20-0 after one quarter.

Defensively, it was Boyle’s ability to force turnovers that was the difference.

Catholic was driving late in the first half when Roller busted the ball loose, allowing the Rebels to recover inside their own five yard line before halftime.

Boyle worked the clock in the second half, with Lanter finishing with just 13 passing yards in the final 24 minutes. But the defense continued to work — recovering two more fumbles to keep the ball in Boyle’s hands.

Jackson Smith added two field goals — one from 32, the other from 21 yards away — to keep the game out of reach.

The Rebels will visit Western Hills next week. The Wolverines beat Garrard County on Friday thanks to a five touchdown performance from Mr. Football frontrunner Wandale Robinson.

“This is a big win, going from a four game gauntlet to a three game,” Reese Smith said. “But we’re not satisfied at all, next week we’ve got Western Hills and Wandale Robinson, he about beat Catholic by himself. He’s a fantastic player and we’ve got to respect that and get ready for them.”