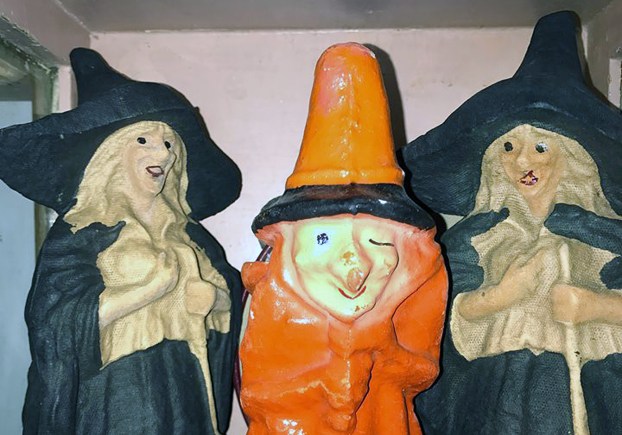 Triple toil and trouble, do these witches make their value bubble?

Question: Hi Jerry, I love that you’re doing all things Halloween for October. How do you like my three witches? They are old paper and are in good condition with no damage. One I got at a sale and one was in my mother’s home and the orange one was a gift. I call the two in black the “glamor witches” and the orange one is the one that has the power and does the work. I think they date to the 1950s. Hit me with a good value, because I have only a little invested in them. Thanks for your time. 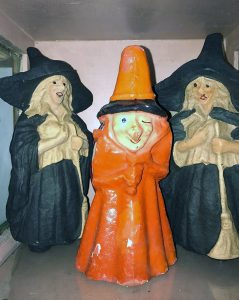 Answer: Thank you, I’ve had some really positive response to the Halloween articles. Hmmm, I might try this for Christmas too. I’ve been happy that I’ve had so many items to pick from.

Now, on to your pieces. Do three make a coven? Either way, they are three creepy looking women. I believe that the two in black are a little older. Maybe dating to the late 1930s. You’re spot on with thinking the orange witch is dating to the 1950s. They were table decorations and were meant to be tossed in the trash after being used as decorations. Remember, there was a time you could buy this type of item in a five and dime store. They might have sold for 50 cents each.

They are papier-maché and I’ll be honest, I was not able to find any in my reference library or even online. Though they have hand-painted details, the black ones anyway, I love the red lipstick on them. I feel that all of them are likely Japanese in origins. By this time, the super-high quality German manufacturing centers had long been devastated by the ultra-cheap companies of Japan. These inexpensive items were made by the train load. However, they were thrown away just as easily. Just think of the laws of supply and demand.

You didn’t give me a size on them. They look to be about seven to nine inches high. They are three-dimensional and have a great vintage look to them. I would expect that in a retail environment or a holiday show they would be priced at $75 each for the two witches in black and the orange witch would be priced at $50. They are great and thanks for sharing them and for reading the articles.

From our files, October 13

100 YEARS AGO — 1918 Don’t be a slacker. Where are those women who registered as being willing to nurse... read more