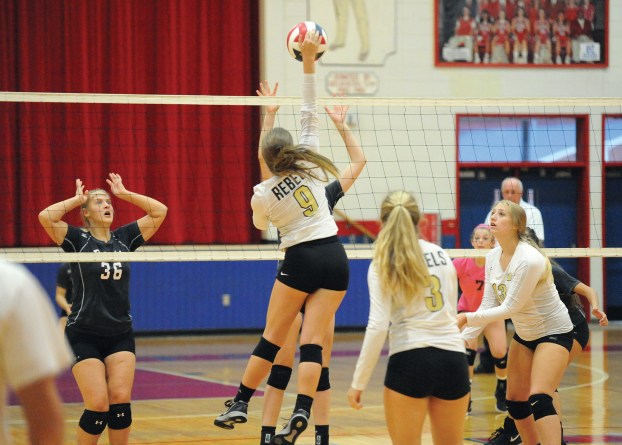 Boyle County volleyball season ends in first round of region

STANFORD — For the fifth year in a row, Boyle County volleyball made the 12th Region tournament.

“We knew that Pulaski was a good team, they’re really tough,” Craig said. “I think all of the teams in this regional tournament are going to be tough, no matter where you’re at. We knew it was going to be tough, we’re a lot younger than they are. We’re more inexperienced but definitely in the third set, my girls came out and played a lot harder, a lot less deer-in-the-headlights, less scared, than the first two.”

Pulaski will be one of the favorites in a deep 12th Region this year — they’re one of five teams in the region with at least 20 wins, and that’s not counting back-to-back champions West Jessamine.

Boyle is undoubtedly one of the younger teams in the field with two freshmen spending significant time on the court. The Rebels rely on three seniors each game, but outside of that trio, the Rebels rely on underclassmen.

“I think it’s important to realize, they’re freshmen and sophomores playing up against a solid junior and senior-led team,” Craig said. “Those girls have been playing together for a really long time at this level, a higher level. The base of my team is younger, we had two freshmen on the court tonight. We’ve got three solid seniors and the rest are sophomores. We’ve got those seniors, but it’s hard for sophomores to step up and help carry the load when they haven’t been in this situation, haven’t experienced this competition. It gets more difficult and challenging.”

The Rebels’ senior class has been with her through all of those four years.

“This is my fourth year as head coach, they’ve been here every single year,” Craig said. “We lost the first year, won the last two in the first round of region. I can’t complain, being as young as we are and losing the good senior class that we did this year, losing some other players along the way for various reasons, I think we recovered well and we made our goal of returning to the region tournament. You can’t be upset about that. We of course wanted to go in as (district champions), of course. But I’m glad we came in and played hard and lost to an awesome team like Pulaski instead of laying down.”

LEXINGTON — It didn’t take long for Boyle County to show it meant business at Lexington Catholic on Friday.... read more