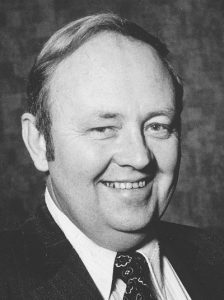 Richard Neat Moores, 91, of Frankfort, went home to his heavenly Father on Thursday, October 11, 2018. He was born in Richmond, Kentucky on April 7, 1927 to Celia Ann Grant Moores Hopper and Coleman Covington Moores, Jr.

Richard was a devoted Christian, husband, father, businessman and veteran. Most recently he was a member of the Evergreen Road Baptist Church in Frankfort and had been a longtime member of Westport Road Baptist Church in Louisville. He served in various roles as deacon, trustee, boys Royal Ambassadors leader and Sunday school and training union teacher at Baptist churches in Danville and Louisville.

He had a successful 45-year career in management positions with the Kroger Company. He began his career with the Richmond Kroger store and managed stores in Danville and Louisville, as well as setting up stores across Kentucky and Indiana, and serving as a Zone Manager in Louisville. He was the first manager of the Kroger Superstores on Westport Road and Middletown. Richard was active in civic services and was a Mason in the Franklin Lodge 28.

Richard was a veteran of World War II where he earned the Bronze Star and served as a guard at the Nuremburg War Crime Trials. He enjoyed golfing, and upon retirement he enjoyed traveling with his wife, Ann, and spending time with his children, grandchildren and great-grandchildren.

Funeral services for Richard Moores will be 1:00 p.m. Monday at LeCompte Johnson Taylor Funeral Home with Rick Simpson officiating. Visitation will be 11:00 a.m. Monday until service time. A graveside service will be held 11:00 a.m. Tuesday at Cave Hill Cemetery in Louisville.