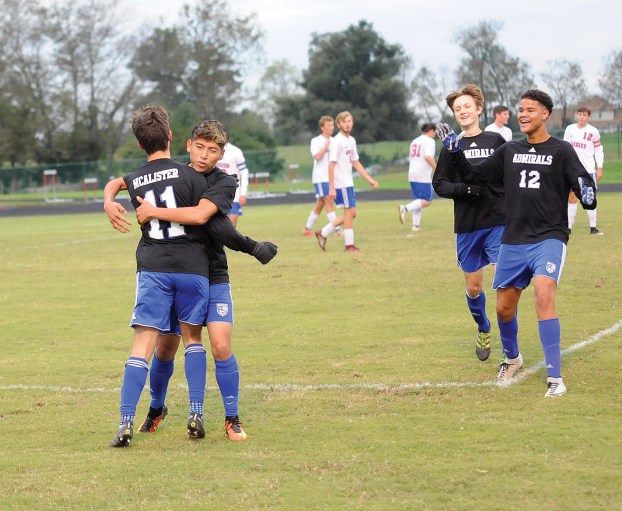 NICHOLASVILLE — The 12th Region boys soccer tournament draw was a familiar one for Danville.

The Admirals squared off against Mercer County for the second-straight year in the opening round of the region tournament, but this year’s contest had a very different result.

Danville took down Mercer with a convincing 4-0 victory with goals from Alec McAllister, Nathan Hazlett and Gabe Cisneros.

Mercer County came back to beat Danville 4-3 last year in the opening round of regions.

“We’ve been talking about it ever since the draw,” Danville head coach Brent Beauman said. “We had goals, we had ideas, dreams last year and we didn’t show up. We wanted to make sure that we got this first win and I guess you could say it was a little redemption, a little revenge against Mercer because they knocked us out last year.”

Both teams worked to figure out to best play on a wet playing surface early in the first half, but it was McAllister to capitalize first.

Hazlett took a scorching free kick from just outside of the box that Mercer County keeper Chris Day couldn’t handle, and McAllister did well to hit a one-time strike into the back of the net.

McAllister would then play a through ball to Cisneros, who whipped in a curving right-footed shot from 22 yards away for Danville’s second score.

Late in the first half, McAllister was again involved in the attack. He was brought down inside the box and converted from the spot to give Danville a 3-0 lead at halftime.

Hazlett added a goal after 12 minutes in the second half. Angel Alavez drove the touchline next to Mercer’s goal and played the ball back to Hazlett for the goal.

McAllister (two goals and an assist) and Hazlett (one goal, one assist) are two seniors who have stepped up this year, but Beauman said his entire senior class has been vital this season.

“Those two guys, along with the other five (seniors), they do so much,” Beauman said. “You’ve got those guys putting numbers on the scoreboard, then you’ve got Tres (Walker) and Jesus (Ayala) who are playing great defense. Spencer (Updike) and Angel are coming through.

“Their locker room worth, those guys, everybody likes them, everybody listens to them and they keep the mood light. They all do a great job. We’re still kind of missing a little bit, we have a huge gap and we talked about it yesterday and hopefully we can have a little more possession in the attacking third. But with the field muddy it’s hard to do those type of things.”

Danville will next play Somerset, winners against Wayne County on Tuesday. The Admirals beat Somerset 1-0 earlier this year in the 12th Region All-A championship.

“Somerset, (head coach Steve Wallace) does such a good job,” Beauman said. “He gets those guys to play so hard against us so we better come ready for that game. Every game is going to be tough, it’s postseason. The emotional side of it is maybe something that we lack, in high school you can get kids fired up and crazy things can happen.”