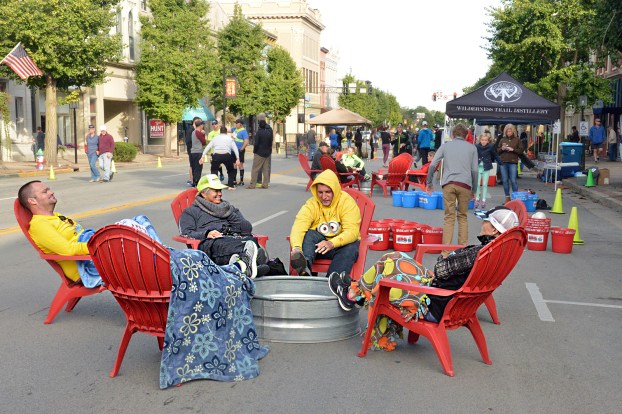 Several thousand runners of all ages from across the United States traveled through Danville Friday evening and continued through the wee hours of Saturday morning during the annual Bourbon Chase relay race.

The first runners jogged onto Main Street about 5:45 p.m. and were welcomed with a festival-type atmosphere as waiting team members cheered. Once runners handed off the baton to their teammate running the next leg of the race, the rest of the team could eat and relax for two or three hours before heading to the next runner exchange location. 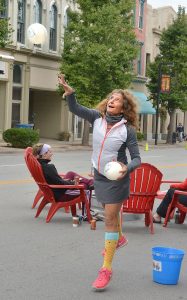 Robin Hart/robin.hart@amnews.com
Tammy Heider, of Florida, has fun playing a ball toss game while waiting for a team member to run into Danville Friday night. She is on the team, ISO Bourbon.

Up until around 10 p.m., Main Street was blocked off between Third and Fourth streets to be a safe place for teams to congregate. Energetic music played over loudspeakers; people filled restaurants; and others played games like “Giant Jenga” and oversized-ping pong ball toss. Others seemed to have fun racing each other while trying to control a rolling bourbon barrel on wooden tracks.

Danville-Boyle County Convention and Visitors Bureau Executive Director Jennifer Kirchner said as of Monday, the Bourbon Chase Most Spirited Community Award hadn’t been announced yet, “But in our minds and hearts, we won.”

The Wilderness Road Amateur Radio Club set up a screen across from the courthouse, which notified teams when their runners were a mile away. This way the next team member could start stretching and warming up before taking over the next leg. This was possible because other WRARC members were stationed at Millennium Park and transmitted the runners’ numbers as they passed by, said club member George Coomer.

The next four hours Main Street filled with runners who talked about their leg of the race and what was the next town to travel to. Restaurants, business and local hotels stayed busy and reported being at nearly 100-percent capacity.

Danville City Commissioner Rick Serres said a lot of folks just stayed in their vans and set up tents in Constitution Square and even at Danville High School lawn since they only had about three hours to nap or rest before heading out.

Teams are usually made up of 12 runners, but a group of five women, who are Illinois State Police officers said their six male teammates, who are also ISP officers “bailed on us at the last minute.” They said they weren’t prepared to take on the entire 200-mile race alone, so they were just going to run half of it.

Another team of women from Tennessee, California and New York were running together as a bachelorette party.

“This event took a village and we couldn’t have pulled it off without the support City Of Danville, volunteers from Shepard’s House, Heart of Danville and Wilderness Trail Distillery to showcase our great little town,” Kirchner said. “While I know the traffic can be a burden for residents, it was a delight to host people from all over the country and I am certain they enjoyed Danville.”

Robin Hart/robin.hart@amnews.com “Draging the Anchor” team members pose for a group photo as they wait for their runner to be the first one of the Bourbon Chase to come down Main Street Friday evening.

Jennifer Kirchner, executive director of the Danville-Boyle County Convention and Visitors Bureau cheers with delight at two Bourbon Chase runners collide as they compete in a friendly barrel rolling competition. (File Photo)
You Might Like