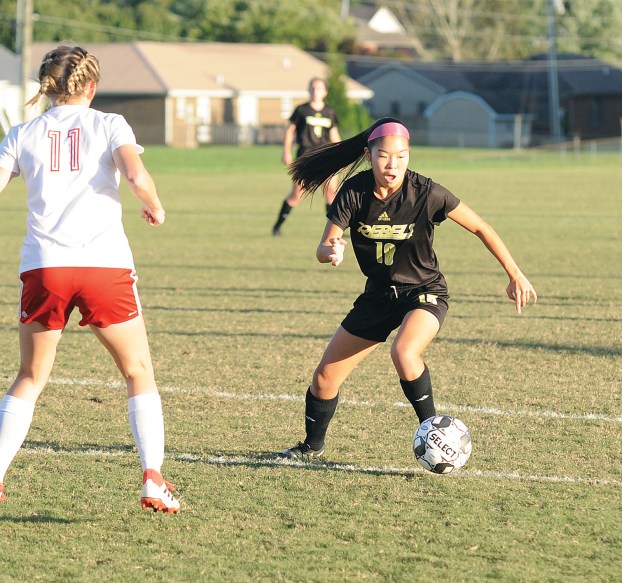 Boyle County took care of business as one of the top teams in the 12th Region tournament on Wednesday, defeating Wayne County 10-0 in 45 minutes in the region quarterfinals at Southwestern.

Chelsea Elmore was the first to score for Boyle County, just 33 seconds into the first half.

But after that goal, it took 12 minutes for the Rebels’ next goal.

“What we’ve practiced the last couple of days is what we wanted to try to utilize tonight and this week,” Boyle head coach Brian Deem said. “It’s tough, kids look at the scoreboards and hear rumors about teams and things like that. I felt like we scored really early and once that happened, what our gameplan was went out the door and we had to make some adjustments, get kids refocused. When we did that I feel like we were able to get the ball in the back of the net.”

Abby Carter scored the next goal, then the Rebels were flying. Elmore added three more while Hailey Cannon and Amanda Cossentine each scored to give Boyle a 7-0 lead at halftime.

Nichole Mingey scored two goals and Nicole Everman had another to give Boyle a 10-0 victory early in the second half.

The Rebels will square off against East Jessamine in the 12th Region tournament semifinals today at 8 p.m. at Southwestern.

“This next game, I know that both teams will play us hard and play us physical,” Deem said. “I know coach Jones over at East, he’s going to have some talented kids. They have a very nice center mid who will create some opportunities. They’ll definitely put us under pressure a lot. If we’re not able to handle the pressure and connect simple passes, we’ll be in trouble.”

Deem said he wants to see his players come out with some urgency as the postseason progresses.

“Right now, you’re playing with some house money,” he said. “I want us to have a little more focus, a little more sense of urgency. With every step forward the stakes get higher. I want us to keep our composure but play with a little more purpose. I think if we do that, that’s all I can ask from my kids.”

Boyle County volleyball season ends in first round of region

STANFORD — For the fifth year in a row, Boyle County volleyball made the 12th Region tournament. The Rebels’ run ended... read more