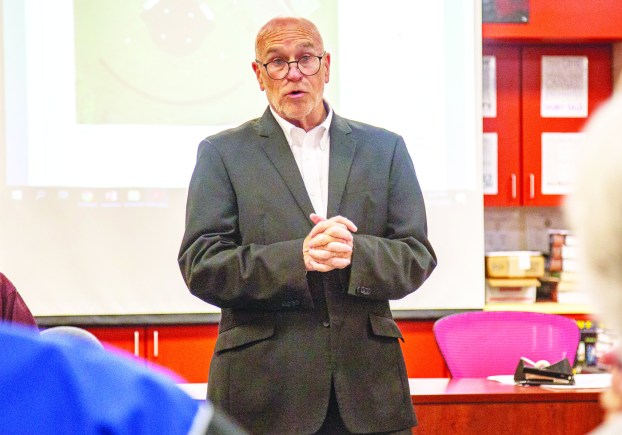 File photo Ben Kleppinger/ben.kleppinger@amnews.com Architect John Carman goes over details of a design for a new softball field that could be built behind Bate Middle School during a previous Danville Board of Education.

Danville school officials have been dreaming of a new softball field behind Bate Middle School for 17 years. The project has finally been moving forward in recent months, but things may have hit a snag Monday, when school board members learned that what they had hoped would be a $650,000 project may actually cost as much as $917,000 — an approximately 41-percent increase.

“When we were at $650,000, I was a little bit worried,” said Paul Dean, finance officer for the school district. “It’s a lot of money coming out of the general fund at one time, along with some other items that we’ve got pending.”

Board members will have a week to think on it before potentially taking action at their Oct. 22 regular meeting. Dean said the board could move forward and seek bids on the project without committing itself to spending any money.

Athletic field capital projects cannot be funded through bonds; the cost must come directly out of a school district’s general fund.

The most recent design for the new softball field was presented Monday night by architect John Carman. Instead of facing the softball field toward the back of Bate Middle, the design makes an almost 180-degree change and faces the field away from the school. That would require additional excavation because home plate, the dugouts and the bleachers would be built into what is now a hillside, Carman explained.

There are benefits to the new design, such as closer parking to seating and good handicap accessibility to the top level of the bleachers. But there are added costs, too — besides the additional excavation, more sidewalks would be required, he said. The newest design also calls for a perimeter fence around the entire facility except for restrooms.

If the board decided to flip the design back the other way, there could be some cost savings, but it wouldn’t negate all of the increased cost projection, Carman said.

That’s because there’s a lot of work for builders and prices have been climbing everywhere, he said.

“The supply and demand in the construction industry right now is such that contractors are not giving their work away,” Carman said.

Board member Lori Finke said she likes the new orientation of the field, but “I’m not excited about the cost implications.”

Board member Steve Becker said he knows another Kentucky school district recently paid $1.2 million for a softball complex, so “I’m not totally shocked with this.”

Becker pointed out even the new price point of $917,000 is just an estimate — there’s no guarantee that bids wouldn’t come back even higher.

“That’s really one of the hardest parts of our job is trying to sit behind that crystal ball,” Carman said. “Construction costs are very fluid and very difficult to predict.”

Dean said the only way the district could get a better estimate of the actual cost would be to put the project out for bid and see what comes back.

Finke suggested if the full project is cost-prohibitive at this point, that it could be completed in phases

“I don’t want to do that. I would love for it to all be able to happen, but if we have to (do it in phases), then that’s might what we have to do,” she said.

Becker said the softball field project has been around in one form or another since 2001.

Boyle and Mercer counties have created a widely praised drug treatment program for former inmates through the Shepherd’s House in... read more