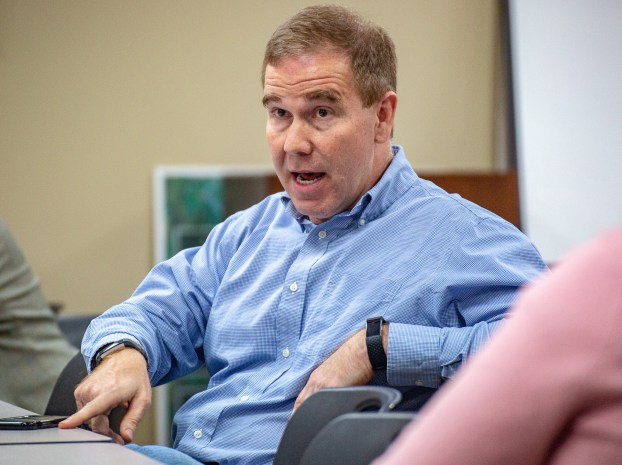 Boyle and Mercer counties have created a widely praised drug treatment program for former inmates through the Shepherd’s House in Danville. But the program continues to see low participation numbers, with fewer than half of the maximum 60 slots filled on a regular basis.

Officials have begun exploring ideas of inviting outside counties to use slots in the program, or even allowing individuals not currently facing drug charges to pay their own way in the program. But there’s a large, untapped group of people who need and want drug treatment, and they’re already sitting inside the Boyle County jail, said Jessica Buck, head of the Public Defender’s Office in Danville, during last week’s meeting of the local Criminal Justice Coordinating Council.

“Circuit court (defendants) are not sent to Shepherd’s House, and that’s why Shepherd’s House is underutilized,” Buck told Boyle County Magistrate Jack Hendricks during the meeting.

Buck said while the Shepherd’s House program is used “fairly robustly” at the district-court level for people charged with misdemeanors, a lot of the people facing drug charges such as possession are charged with felonies and their cases are handled at the circuit-court level.

“The people who would benefit the most from the Shepherd’s House, which are my felony clients charged with possession of a controlled substance, who are eligible for the statute for deferred prosecution or diversion, who could use the Shepherd’s House program as a condition of their diversion or their deferral — it’s not even an option for them.”

Mercer County Attorney Ted Dean said while the 50th Circuit Court that serves Boyle and Mercer counties could order participation in Shepherd’s House as a condition, he would be concerned about the two counties paying for that treatment for people considered to be state inmates.

“I would love to see our circuit court people go into Shepherd’s House. I think that would be great. I think you would see the most tremendous amount of gains possible if we had that,” Dean said. “With my being fiscally responsible for my county and my county’s tax dollars, I would roll around on the floor in opposition to it because those are state inmates and that should be a state-funded thing.

“If it’s possible for the state to fund that, then I’ve got no problem with it. If we’re asking the Mercer Fiscal Court and the Boyle Fiscal Court to pay for sentencing things for circuit court people — their final sentence, that’s a state obligation in my mind.”

While it costs about $32 a day to house an inmate in the Boyle County Detention Center, the Shepherd’s House charges the counties $13 a day for inmates who have been released to participate in its program, according to the most recent end-of-month review from Shepherd’s House Director Roger Fox.

The Shepherd’s House program saved the counties an estimated $13,110 in September by keeping more than 20 clients out of the jail, according to the report.

Conley said there is “limbo time” between when circuit court defendants could potentially begin treatment at Shepherd’s House and before they’re final-sentenced, at which point they would clearly be the responsibility of the state.

Dean said “arguably,” you could do that, but the inmates might only get to participate for a number of weeks or months.

“Six weeks in IOP (intensive outpatient treatment) is good,” Conley said. “It’s a start for a lot of people.”

“You’re right and I’m just throwing out more problems, but I would have a real hard time and saying” they have to pay for these inmates.

Buck said if a defendant gets re-arrested on a probation violation, “they’re being held as county inmates.”

If people could get out of jail quicker and into a program like the Shepherd’s House, “there’s a real cost-benefit right there” because their case takes up less of the court’s time and “we’re not paying for them again when they come back on a violation because all we did was give them diversion and not give them any of the tools they need to be successful.”

Buck said treatment is not currently required for defendants who are given diversion or probation at the circuit court level in Boyle and Mercer counties.

“We just say, ‘Congratulations, we gave you diversion. I know you’ve been in jail for five months, so you’re not using, but you’re not sober…'” she said.

“We’re paying for it anyway,” Hendricks said, pointing out that the counties pay for Shepherd’s House treatment slots 20 at a time. If the counties have 21 people participating, for example, that means they’re paying for 40 slots and 19 are just sitting empty, he said.

“If there was some way we could figure out how to take this successful program … and aim for that, to get more people in it … to me, that would be a big accomplishment right there.”

Even though the Housing Authority of Danville moved into its modern, Mission-style office building more than five years ago, it... read more