Tyler Thompson, KSR’s editor-in-chief was Rotary’s speaker on Oct. 12. She is a graduate of Danville High School (’02) and Davidson College (’06).  She runs the day-to-day operations of the largest independent sports blog in the country.

“Thank you for that warm welcome and it’s great to see so many friendly faces in the crowd. How many of you listen to Kentucky Sports Radio or have read the website? We also have very popular radio personalities: Matt Jones, Ryan Lemond and Drew Franklin.”

Thompson said growing up in Danville, where everybody loves sports, was a big factor in her career choice. In high school Tyler worked on the newspaper. Thompson’s favorite teacher, Mrs. Scott, gave her advice and tutorage that has been instrumental in her career successes. Thompson moved to Nashville after college to become a copy editor. After copy-editing became a little boring, she entered a blogger contest in 2008. After coming in third, she gave up blogging dreams for a while. But she continued tracking the Wildcats on Kentucky Sports Radio, which was in its infancy at the time. She liked the way the guys talked and wrote in a fun style that was more appealing than those of newspapers and TV stations. 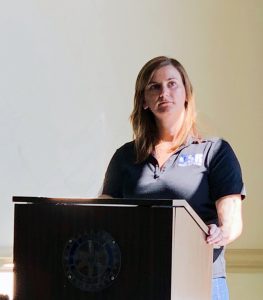 In 2009, Larry Vaught gave her a chance to freelance on his website. That opportunity got her back into blogging. Later, Jones called with a part-time job offer at KentuckySportsRadio.com. Three years later, she joined the site full-time and started covering Kentucky basketball and football for a living.

Thompson is often asked, “Why don’t you move back to Kentucky, since you only write about Kentucky sports?” She says that she met her husband in Nashville, who is a lifelong resident. Their lives were established before the KSR opportunity came along. “Besides, I’m only three hours away, so I can easily drive up here when that’s required. Generally, I can cover things via the Internet; I come to Kentucky for important events and stay with my family and see all my friends when here.”

The KSR team opened a sports bar called KSBar & Grill on south Broadway several weeks ago. They hope KSBar & Grill will become the headquarters for Wildcat sports fans. Their plan is to let fans park at the bar and shuttle to Kroger Stadium.

Asked about her favorite players, Tyler said she has covered a lot of famous athletes and coaches, but Karl Towns is probably her favorite. “He seems too good to be true. He is thoughtful, courteous and really cares about people.”

Asked if Calipari would stay at Kentucky, Thompson responded, “In 2015, I thought he was going to go take the NBA Cleveland Cavaliers offer … but he turned down over $80 million. He seemed to be re-evaluating what he wanted to do with his career and his life. Now I think he genuinely gets pleasure out of helping families and making their dreams come true. I hope he stays and I think he will.”

Asked about her take on the FBI’s release of an indictment alleging widespread corruption within college basketball, Thompson said, “at the time, we were told that this was just ‘the tip of the iceberg,’ but 12 months later, the landscape of college basketball looks pretty much the same. The six programs originally targeted make the NCAA a lot of money the NCAA is a little jaded about things sometimes.” As an afterthought, Tyler volunteered that “one-and-done” might be a victim of the investigation, but said that would have some serious consequences, too.

Thompson said she’s been excited about Kentucky football this year. She thought the defense at Texas A&M was outstanding. Tyler thinks Georgia will be the pivotal game in UK’s season. She is rooting very hard for LSU to beat Georgia, which would give Kentucky a better chance of making the SEC championship. She worries a little about the Missouri game too. “I think Terry Wilson’s summer work at the Quarterback Academy camp in Arizona has definitely improved his self-confidence. We need to maybe remember is he’s only six games into his college career.”