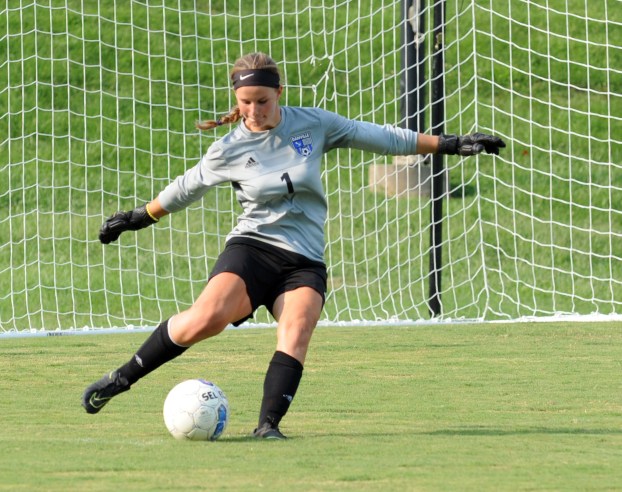 The Admirals were up against top-five West Jessamine without starting goalkeeper Grace Gaffney, who went down with a knee injury in the region quarterfinals.

Sanders, a freshman, earned her first career start in the place of Gaffney, a senior, who is at the top of Danville’s history books for shutouts.

The Admirals went down six goals in the first half but tightened up in the second half, allowing two goals. The final score was 8-0.

“In the first half, we kind of lost ourselves a little bit,” Smith said. “Second half we were a little more determined, even though we had more key players step off due to injury. Other girls stepped up and we had players who stepped into positions they had never played. You don’t want that in a region game but that’s where we were at. The girls, they kept working. At no point did they just quit, they kept working and kept playing hard and for each other. As a coach, in situations like this, that’s what you ask for. This team has been through a lot this year and I couldn’t be more proud of them.”

Gaffney and fellow senior Kailyn Wilcher have led the Danville defense this year and said that they will miss the team atmosphere the most.

“We’ve been together for four years, all six of us seniors. It’s a family,” Wilcher said. “It kinda sucks losing this way but we went out the way we did. We wanted to go out strong.”

Gaffney said that really hit her this season as a senior.

“I think it hit me senior year, you have a sense of leadership that you haven’t had before,” she said. “It was more than just a team to me, they were my family that I had to take care of. We didn’t win every game but it’s about making them better players, better people. I’m really proud of them and I’m just really blessed to have been with them the amount of time that I did.”

Smith said he saw some of that fight in the second half. His team could’ve rolled over but didn’t, they fought for their teammates.

“That’s what we talked about at halftime, moments like this are when character shines through,” he said. “Our girls weren’t going to roll over or just walk around on the field, they were going to try to get something out of it. Six-zero at halftime, a win might’ve been too much to ask, but they still wanted to get something out of it. They wanted to finish the season off, working as hard as they could.”

Wilcher said that’s what she will remember from the team — their hard work and effort through the years.

“Definitely standing up for everybody, each other,” she said. “Remembering all the fun times we had, the laughter. Just those games where you’re having fun, you’re excited, you’re playing hard. That’s always good. I think I’ll always look back on that.”

Gaffney will always remember her teammates.

“I’m not going to remember every single game, every single result,” Gaffney said. “I’ll remember the rivalry games, but I think most importantly I’m going to remember how each and every member of this team made me feel. It was always acceptance, always love and just a competitive environment to keep pushing every day.”

NICHOLASVILLE — The 12th Region boys soccer tournament draw was a familiar one for Danville. The Admirals squared off against... read more