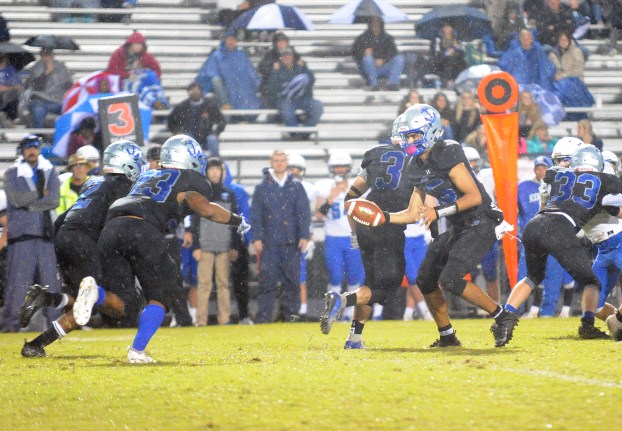 LCA comes back to stun Danville

The ending wasn’t as glamorous.

The Admirals led for three quarters before a comeback by district rival Lexington Christian Academy left the hosts on the wrong side of the scoreboard at the end of the game, 14-13.

“We’re just not playing real good football,” Danville head coach Clay Clevenger said. “I can’t explain it necessarily, it just seems like we get some momentum, do some things right, then a mistake will happen, turnover, blocked kick, blocked extra point. It’s part of it, I guess.”

Senior Brennen McGuire started his senior night with a bang, taking the opening kickoff back for a touchdown.

That was the only score in the first 36 minutes of game time.

The Admirals had a pair of drives in the second quarter that ended via turnover in the red zone, one fumble and one interception.

At halftime, Danville quarterback Zach Thornton had completed one pass for three yards. The team had 79 rushing yards, led by McGuire’s 54.

Danville opened the second half with a fumble recovery on LCA’s first drive, but a blocked field goal ended the drive for Danville.

After three quarters, Danville had the opportunities and the lead, 7-0. But LCA proved that lead wasn’t safe.

“You’ve got to take each and every play serious,” Clevenger said. “That starts with a mindset. You’ve got to be able to do that in practice, then do it when you get into game situations. We’re a grind it out team. But we make a key mistake here and there that keeps us from putting points on the board and doing some things. We’ve got to know who we are and go to that.”

LCA tied the game with a 22-yard touchdown pass from Jayden Barnhardt to Dearious Smith with 10:25 left in the game.

Danville’s offense stalled and Barnhardt struck again, this time throwing a 77-yard touchdown pass to Will Vernon on a third down and 10 play.

Danville’s offense and defense stayed up for the challenge, though, and Thornton would find Seth Gosser for a 13-yard touchdown pass to make it a one-point game with 67 seconds left.

“The blocks aren’t on (Hazlett), it’s our blocking up front, we’re allowing too much penetration,” Clevenger said. “Football is a funny game, one guy doesn’t do his job and a lot of times the ball finds him, so to speak. It is what it is on that. Everybody’s got to do their job on every play for us to have a chance to be successful.”

Danville would attempt an onside kick but LCA recovered, and the Eagles earned a first down to secure the victory.

The loss puts Danville at the 3-seed in Class 2A, District 7, meaning the Admirals will travel for the playoffs instead of hosting a game. Danville will visit Leslie County the 2-seed from District 8, in the first round of the playoffs in two weeks.

“We’ve got good kids. They work hard in practice,” Clevenger said. “I think just that attention to detail. In the first half, they kept us on a long field, they kept us backed up. But we made some plays, they made some plays. We just turned the ball over a little too much when it was all said and done.