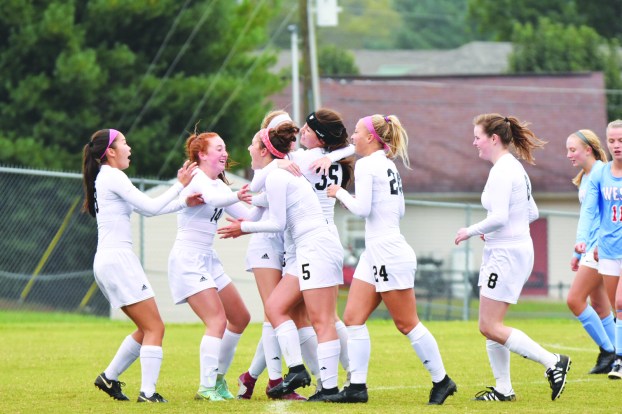 West too much for Rebels

SOMERSET — Boyle County’s girls soccer team gave a top-10 team all it could handle on Saturday in the 12th Region championship.

It was a game that was reflective of the Rebels’ season: Boyle played one of the toughest schedules in the state this year and found a way to battle each game, head coach Brian Deem said.

“This team absolutely showed what the definition of grinding through truly means,” Deem said. “I’m proud of them for that.”

The Rebels opened the scoring in Saturday’s championship game against West Jessamine, but three unanswered goals for the Colts gave West its third region title in as many years.

“I am so proud of my girls. They played their hearts out,” Deem said. “They stood up to West and went toe to toe with them for 80 minutes.”

Boyle’s opening goal was just what Deem and his coaching staff wanted to see.

The Rebels’ high pressure forced West into a turnover. Chelsea Elmore picked up the ball, played it back to Abby Carter in the middle of the field. Carter’s play was deflected into Lindsey Warriner’s path, and Warriner buried the first goal of the game 10 minutes into the first half.

“We did really well, we came out to our game plan which was to put them under pressure, force them to play faster than they normally would like,” Deem said. “We were able to cause turnovers, get us in transition situations which led to the goal.

“It was a complete transition goal, something that we had been doing the last three weeks that paid off quite a bit for us. To be able to get that turnover and get numbers forward was a good sign for us. When we went up 1-0 I felt pretty good about it and thought that we could get at least one more into the back of the net, which would give us good odds to be successful.”

West would be the first to respond, just minutes before halftime.

“They came back and tied it up and I knew the odds of us shutting out West were very low,” Deem said. “They came back and scored to tie it up, but I still feel like the play was back and forth. They were starting to do some things that they were more accustomed to, but we were still able to create turnovers.”

Boyle created a golden opportunity late in the first half when West keeper Anna Rexford came out to stop a through ball, Amanda Cossentine beat her there and the ball fell to Abby Howard took a shot, only for it to be saved by West defender Saraya Young.

At halftime, that was Deem’s team talk: Continue the game plan, apply pressure and keep the tempo high.

“Second half, I’m not sure really what happened,” Deem said. “All the intensity and the attacking mentality that we had fell off. I think we kind of got away from our gameplan a little bit, we played low pressure and defended instead. That wasn’t what we discussed at half. I don’t know if the girls got caught up in the moment, realized how close they were and went to a playing not to lose mentality. West was really able to gain control of the possession and strung us out.”

As West continued to keep possession, Boyle’s defense and goalkeeper stayed up to the task. Keeper Alyssa Montgomery stopped one penalty kick and allowed another, and West’s second goal was unlucky for the keeper, Deem said.

“Alyssa did a fantastic job,” the head coach said. “My kids played their hearts out. This team, I’m so proud of them, they completely overachieved this year. It was the toughest schedule I’ve ever put together as the coach of this program. They learned how to grind, learned how to take care of each other.”

The loss ends Boyle’s season at 13-10, and with a strength of schedule in the teens, Deem said he was proud of the way his players fought each game.

“It wasn’t always sunshine and rainbows with us, there were times when we had to do some self-reflection, but these kids came back,” he said. “We were able to win districts over a tough Danville team for the second time this year and put themselves in a position to go to the state tournament. I’m really proud of my kids, my senior class.”

“I felt like the senior class was a very diverse class of personalities,” Deem said. “We had some strong personalities, we had quiet personalities. We had personalities that were very hyper-positive. It was a very mixed, diverse group of kids. It took time for them to gel, but when we did we started to play our best soccer. They’re a talented group and a great group of girls.

“These young women will go on to do great things, and that’s what I told them at the end of the game. This is just the end of the chapter of something about your life. You don’t want to live your life as a senior in high school playing soccer. It’s time to finish the chapter and go on to your next endeavor. Whatever it is, this is just one chapter of your story. The book should not be all about this one chapter.”

NICHOLASVILLE — Sometimes the ending doesn’t fit the narrative. That was the story Saturday in Nicholasville, where Danville’s boys soccer... read more