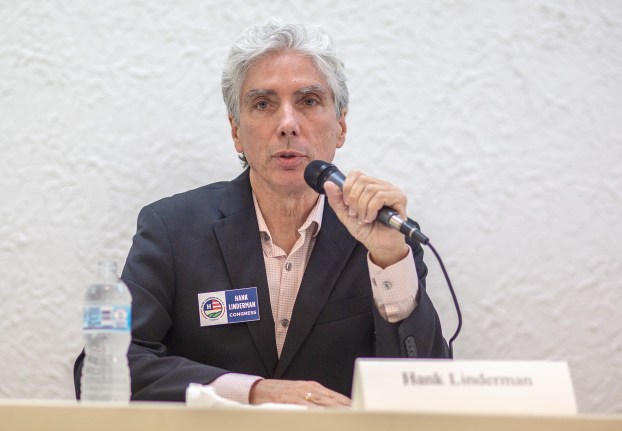 Only one of three candidates seeking to represent the Second Congressional District in the U.S. House of Representatives attended a live candidate forum in Mercer County Tuesday night.

The congressional race was the first of seven general-election races on the docket for the forum, which was co-sponsored by Mercer County’s Democratic and Republican parties, as well as the Harrodsburg Herald and Hometown Radio WHBN, which broadcasted the forums on 1420 AM.

Shortly before the forum went live, moderator Earl Motzer looked over to the candidate tables and commented to Democratic candidate Hank Linderman, “You doing this a lot by yourself?” Linderman nodded.

There hasn’t been a public forum or debate amongst the three candidates for Congress and it doesn’t appear likely there will be one before the Nov. 6 election. Linderman similarly appeared by himself on KET, when the news show Kentucky Tonight invited all three candidates to speak on the air. 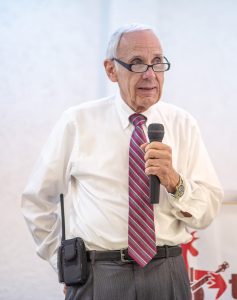 Linderman is challenging incumbent Republican Brett Guthrie for the seat Guthrie has held for five terms. There’s also an Independent candidate in the race, Thomas Loecken.

Linderman told the close to 100 people in attendance at the Lions Community Center and radio listeners he believes health care and the role of money in politics are the “two most critical issues facing Kentucky.”

“We need health care for all of us that’s less expensive, easier for us to use and that is focused on our health more than quarterly profits,” Linderman said. “The other issue that gets spoken about is the issue of corruption. Corruption of corporate PAC money and the effects on candidates. We find that candidates who receive lots of money from corporate PACs are going to vote the way those corporations want them to vote. So I have announced that I will not accept any corporate PACs.

Motzer noted without any other candidates present, the rules about rotating who answers first would not be in effect.

“The second question also goes to you,” Motzer said. “And it is what do you see as being the most important part of being a U.S. representative?”

“… It seems to me that representing the people is the most important consideration for serving in the House of Representatives,” Linderman responded. “I am not a professional politician but I have worked all my life. There are very few working people serving in Congress. So I’m hoping to be elected and be able to bring that viewpoint.”

Linderman answered in the affirmative that he would support an increase to the minimum wage.

“Wages in the United States have been flat — is one way of looking at it — or they’ve actually been dropping when you correct for the cost of living,” Linderman said. “Meanwhile the stock market has gone up over 20 times since 1985. So our society is out of balance and this causes lots of problems.”

Linderman said the U.S. is not doing enough to fight poverty.

“We have so much inequality in our society that leads to instability. It leads to generations of folks who are unable to make their way for themselves,” he said. “So, with higher wages, with more education, with better jobs and repairing health care, we should be able to help folks move out of poverty.”

Asked about tariffs and their impact on farmers, Linderman said many farmers are already affected and it may be tough to get markets back once they’re gone.

Linderman said Kentucky is “one of the top states for the family farmer” but that family farms “are in real trouble and we as a nation need to support the rural lifestyle by supporting those farms.”

One thing he wants to do to support farmers and people living in rural areas is undertake a massive rural broadband expansion program.

“I also have been proposing rural broadband as a national program similar to Franklin Delano Roosevelt’s rural electrification program in 1936,” he said. “I think we could sell savings bonds, finance this and just get rural broadband infrastructure to where it needs to be, which would enhance rural life and encourage folks to stay here.”

In his closing statement, Linderman said running for public office has been “a wonderful experience.”

The forum was also sponsored by Best Sound Around and Rockensmith Sounds.

“Because I work for a non-profit, every day is different,” says Kate Snyder. And she loves that about the Community... read more