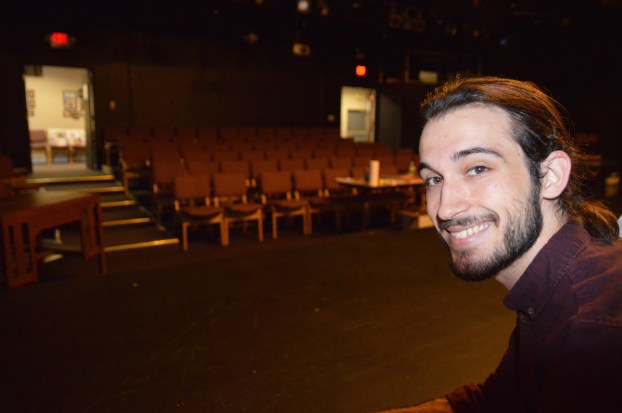 New community outreach coordinator at West T. Hill is no stranger to theater

Last year, around this time, Kolton Winfield was working construction in Ohio. But something was calling him back home.

One fated afternoon, while Karen Logue was laid up at home after knee surgery, Winfield went over to talk to her. Now, he’s  community outreach coordinator for West T. Hill Community Theater. It was kismet, they say. 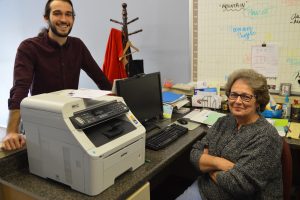 “He used to be scared to death of me. Now he makes fun of me,” Logue says, and they both laugh. She says now, they’re peers; they’re colleagues.

Sitting in the front of West Wing, the administrative offices across the street from the theater,

Winfield explains how he graduated from Berea College in 2017 with a degree in drama. Doing construction gave him some real-life experience.

After Winfield and Logue put their heads together and came up with a plan, the theater’s board bought into it. He may go to grad school next year, as far away as northern California, if it happens. But for now, he lives, eats and breathes WTH community theater; not only is he working there, he lives in the apartment upstairs from West Wing.

And he’s ready to get others to buy into local theater.

“He’s anxious to make sure the theater is not dark for any length of time, so that there’s always something going on,” Logue says. She’s always thought it would be great to have someone shadow her.

“I mean, I am getting older. And it has been 40 years …” Logue says. Whenever she hears someone say, “I didn’t even know you all were here” in regards to the theater, it breaks her heart.

“Aside from all the energy he brings, and just being a shot in the arm, he’s so knowledgeable. He’s been doing theater since he was 8, and it’s become his life’s work. And it’s good for him to get this kind of experience.” Logue says most people don’t know the ins and outs of running a community theater; now Winfield does.

“He sees the good, the bad and the ugly …” she says. She readily admits: she’s already “thrown him to the wolves” a few times with angry parents of children who weren’t cast, scheduling conflicts and anything else that comes her way she wants him to be able to handle, and he’s handling it with poise. 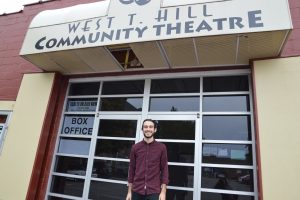 “I think being the face of a small non-profit, people expect a certain level of warmth and availability they might not expect of a larger company. And being able to deliver that regardless of the tone you’re approached with is the key,” he says.

Friday, he has not only organized but will be taking part in an improv night. The troupe will be Winfield, Beth Marlowe, Maggie Jenkins, Sarabeth Marlow, Haley Hopkins, Jack Graham, Brent Bowman and Becky Moore, and will be done in the “Whose Line is it Anyway” fashion.

They will take written audience suggestions before the show, some during and there will be audience participation at times, Winfield says.

“It’s a very electric atmosphere, but very laid back. Lots of energy,” Winfield says. Logue begins to laugh again, and says just thinking about how they do the whole thing cracks her up.

When asked if the troupe will take political suggestions, Logue gasps and laughs. “Ohhhhh,” she says. “Well, within reason …” Winfield says.

Improv nights are something he hopes to begin offering monthly, although the theater will be busy over the next two months for its big Christmas show, “Annie Jr.” More kismet, they say, since Winfield played the role of Rooster when he was 9.

He’s already working on a grand entrance for Annie’s opening night on Nov. 29 — having the cast show up, in costume and character, in a ‘30s vehicle. And Bluegrass and Buttercream may be joining in on the rave, creating a Little Orphan Annie cupcake — hopefully — to be sold throughout the duration the production is up. There may even be some carolling involved.

Then on Jan. 12, the theater will offer a talent show, with cash prizes for the top three winners. Auditions will be held on Jan. 5, and any kind of act will be considered, Winfield says, “Whether they want to sing, play an instrument, do stand-up, we’re open. They can win cash, and not to mention — bragging rights …”

But in between now and then, a regular offering at the theater is the Kentucky Music Preview Listening Room Concert Series, a collaboration with podcastor Dusty Wesley that normally happens every second Thursday. Although the November event will be on Wednesday the 7th, featuring local musician Jason Sinkhorn. Logue says it’s an intimate, laid back event where families can bring their kids and just enjoy the music. 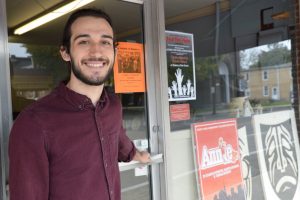 Bobbie Curd/bobbie.curd@amnews.com
Winfield stands in front of the door to West Wing.

The next big thing on the theater’s agenda is planning the 40th anniversary shin dig in 2019. Logue says they’re checking out venues and food offerings. And when the weather lets up after winter, Winfield says he wants to get more outdoor performances on the list, somehow.

“I’d love to take advantage of the beautiful park at Weisiger, even Millenium, with some type of staging, whether it be simple scenes or monologues,” he says.

Logue says Winfield’s new position and everything he’s doing — it’s all about making the theater accessible to everyone. “We don’t ever want to become stagnant. We’re into our 40th year, my goodness …”

• “Annie, Jr.” opens Nov. 29, and will run Thursday-Sunday, through Dec. 9. Tickets are on sale now at westthill.net.

“Heartwarming” actions on a cold morning helped keep many local United Way volunteers cozy as they worked to make a... read more