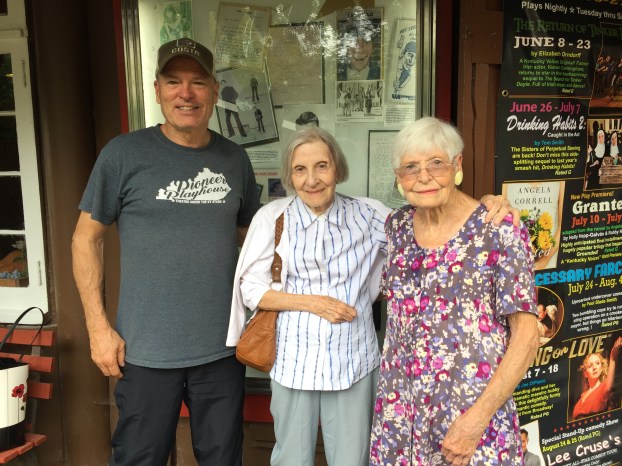 An ingénue’s return: Dorothy Moore recalls days gone by during visit to Pioneer Playhouse this summer

The Year was 1955. Dorothy Edwards (soon to be Moore) was an aspiring young actress fresh out of Illinois State University with stars in her eyes when she met and auditioned for Colonel Eben C Henson in the basement of the old Henson Hotel on Main Street in Danville and was hired for the 5thseason of the upstart Pioneer Playhouse. “They didn’t pay me any money,” remembers Moore. “I was considered an acting apprentice.”

This past season at Pioneer Playhouse, Moore —  now a spry 85 with a comic twinkle in her eye — made her first ever return to Danville and shared photographs and memories with Pioneer Playhouse’s Robby Henson and Charlotte Henson. Moore now lives in North Carolina. She is the aunt of Linda Bruckheimer who owns a home in Bloomfield with her film producer husband. It was the dangers of hurricane Florence, and Linda’s insistence that contributed to Moore’s recent visit to Kentucky. 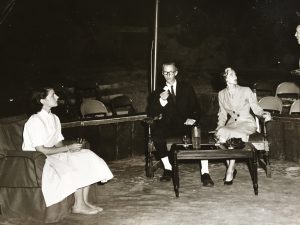 Moore remembers during her time here the Playhouse actors were housed upstairs above the old Sunnyside Pool and performed on a theater-in-the-round stage that is now a weed-cracked patch of cement beside the old pool complex.

“It was wonderful and nostalgic to hear Dorothy’s stories,” said Robby Henson, Pioneer Playhouse’s artistic director. “Dorothy’s a living link to the time right after our beginning at the old Darnell Hospital (1950), and before Raintree County (1957) when our father built the current theater complex around the Raintree train station set. Very few can remember the old theater-in-the-round beside the pool. It only existed for about three years. But Dorothy can!”

Moore proudly displayed a scrap book of photographs and reviews of herself as a svelte and sophisticated young actress on the playhouse stage.

“We used to tour all the Kentucky parks with our plays, Cumberland Falls, Natural Bridge,” Moore said. Moore remembers that their tour audiences liked the comedies, but the dramas — not so much.

“Your father, Eben, played the lead in Ibsen’s ‘Master Builder’ and boy, the crowd at Renfro Valley didn’t like it a bit. It wasn’t country music enough!” Moore said.

Moore met her husband Lee Moore at the Playhouse.  Lee Moore was a dashing handsome leading man. Did he sweep her off her feet?

“I wish he hadn’t,” Dorothy Moore deadpans. “We were only married five years.”  But the marriage did lead Dorothy Moore to New York City, where she lived and worked for seven years before moving to San Francisco to start the next chapter in her life, that included appearing in a movie with Robin Williams. And her time in California included trips to LA to visit her favorite niece Linda.

“I was visiting her the night she met Jerry Bruckheimer,” Dorothy Moore said. “He wasn’t such a big deal back then.”

Dorothy Moore looked out a rain-flecked car window at the cracked concrete stage, where she performed as an ingénue 63 years ago. “The playhouse was a special time. Boy, I wish I was young again.” 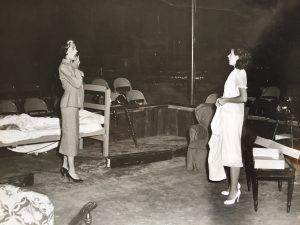 NORTON CENTER FOR THE ARTS Press release Direct from the Blackfriars Playhouse, the only recreation of Shakespeare’s indoor theater in... read more