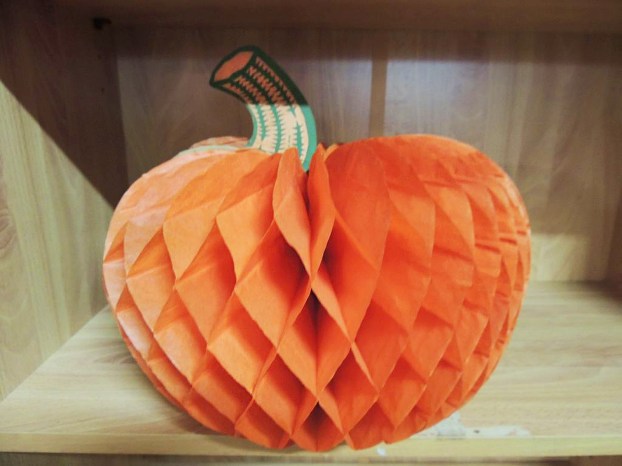 Question: Jerry, I don’t have anything that is really old or valuable in the way of Halloween. I do have loads of these paper Halloween pieces. Some were my Aunt Hilden’s, who was a school teacher back in the 1940s. Some were my parents’. They used to decorate the living and dining rooms and have mine and my brothers’ classmates to come for a party. That was back in the day. Most have been thrown away or torn up. But I still have some of them. Like this jack-o’-lantern. Hope that you can tell me something about this old junk. Should I toss them too? Thank you.

Answer: No, don’t toss them. To be proper these are called honeycomb pieces — cheaply made from tissue paper and cardboard. Many were made in Japan or America. I’ve seen them in the older Halloween party books, that had instructions on how to make this type of decorating from scratch. Boy, you talk about complicated. Like most things, big business got in on the act. They were cheap, colorful and an instant hit.

Sure, they’re not the more collectible pieces like those that we’ve featured in the previous issues. But many of those things were at one time just as inexpensive and disposable. However, they have something else —  nostalgia. Everyone remembers a school teacher or parent who bought one of these honeycomb pieces at Newberry’s or some other dime store. It’s that fond remembrance of childhood times that spurs on a lot of collecting. Let’s face it, these things were delicate and they didn’t last long. They weren’t supposed to. Use it a time or two and toss it.

I love your pumpkin. The colors are still bright and the condition is good. I think that by the mark on it dates it to the 1960s or so. It’s one of the USA pieces and many people love to collect USA things.

I would wager that when new, it sold for 75 cents. Today, in this condition at a nice antiques shop, it would be priced for about $10. Not a lot of money but very worthy of being collected and loved. Thanks for sharing it with us.

Front Page History: War was news of the day in 1943

Editor’s note: Front Page History is a new feature looking back at a front page of The Advocate-Messenger on this... read more