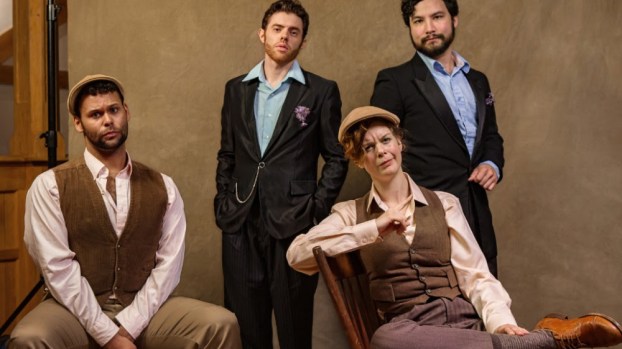 Direct from the Blackfriars Playhouse, the only recreation of Shakespeare’s indoor theater in the world, the American Shakespeare Center on Tour bring Shakespeare’s “The Comedy of Errors” to Danville on Nov. 2. Two long-separated twins, their two tricky servants (also twins), a jealous wife, and her lovelorn sister romp through this fast-paced, rollicking farse filled with mistaken identities and slapstick humor sure to have audiences laughing from the first confusion to the last.

“This is one of Shakespeare’s most farcical plays – and shortest,” said Norton Center Executive Director Steve Hoffman. “True to the title, the comedy revolves around twins separated at birth, and is loaded with witty confusion, mistaken identity, and hilarity. American Shakespeare Center does a great job of drawing the audience into their productions.”

ASC on Tour invites audiences to enjoy shows that are produced as Shakespeare’s company performed them — surrounded by audience members who share the same light with the actors, each of whom play multiple roles. This highly interactive style allows ASC on Tour to forge a sense of community between performers and audience rarely found in theatre today. Taking Roman comedy to dizzying heights, ASC strives to, “enrich and celebrate the human spirit, as it lives in Shakespeare’s plays, and in our daily lives as we collaborate, create, listen, and learn from each other [to create] a vibrant, diverse, and healthy community on a local, regional, national, and international level.”

As an additional performance add-on, ticket holders to “Comedy of Errors” have the opportunity to also see Sophocles’ classic play, “Antigone,” Nov. 1, for just $10.

Hoffman adds, “This full production is being presented as a special Centre College event for its student body. We are delighted to be able to also offer patrons an exclusive opportunity to attend this very timely production (socially and politically), written in approximately 441 BC.”

The Comedy of Errors will be performed at Centre College’s Norton Center for the Arts on 8 p.m. Nov. 2 in Newlin Hall. Tickets, starting at $27, are available at www.NortonCenter.com or by calling the box office at (859) 236-4692

Joni House says there are more benefits out there than people are aware of where restoring their historical properties are... read more