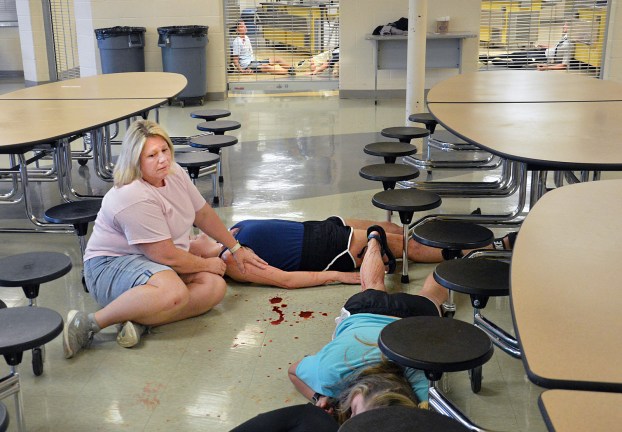 File photo A staff member at Boyle County High School sits with "shooting victims" during the active shooter drill that was held on Aug. 3. Emergency officials consider anyone who is first on a scene is considered a "first responder" and needs to know the steps of "Stop the Bleed."

Lessons Learned: Local emergency officials share what was learned during the active shooter drill in August

In the event of a mass emergency, such as a school shooting or multi-vehicle crash involving many casualties, local first responders now have a better understanding of how to work together in order to save as many people as possible, thanks to the active shooter drill they conducted in early August.

The Danville-Boyle County Local Emergency Planning Committee held its quarterly meeting on Wednesday and heard emergency officials talk about what they learned and what changes to make stemming from their active shooter drill that was held on Aug. 3 at Boyle County High School. 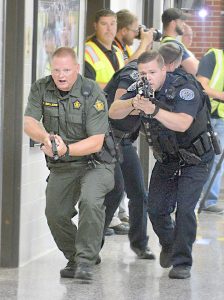 File photo
Officers from the Boyle County Sheriff’s Office and Danville Police Department work side by side searching for the suspect during an active shooter drill that was held at Boyle County High School on Aug. 3.

On that day, 167 people — including officers with the Danville Police Department and Boyle County Sheriff’s office, EMS, Danville Fire Department and many Boyle County High School students, staff and parents — participated in the scenario where a shooter entered the building and injured 21 people.

During the drill, officers were learning to “establish a safety bubble” so that tactical paramedic and rescue task force teams can go in immediately behind officers and retrieve victims before the suspect is even apprehended, said Boyle County Sheriff Derek Robbins.

“There’s no doubt in my mind the quicker you can get them to a trauma center, the more opportunity that they have to live,” Robbins said. “I have all the confidence in the world that we knew what we had to do to stop the shooter,” but it’s just as important to figure out how to save lives before that happens.

In addition to having officers secure the location of victims so that paramedics can start treatment, firefighters will begin training next year as members of a rescue task force.

In cases where a shooter is involved, EMS personnel have been required to wait for law enforcement to find the shooter and completely clear and secure the building before going inside to safely retrieve victims. During those long minutes and sometimes hours, shooting victims who may have been saved — if help arrived sooner — have been left to die from their wounds, said Mike Rogers, EMS director.

“It makes more sense for the fire department to do the rescue task force,” Rogers said. He said firefighters are trained to go into dangerous situations to do their job, and expanding their role with rescue task force training and body armour, firefighters will be an important asset to have in case of a mass emergency.

Another change that has already come about because of what was learned during the drill is that EMS has switched to much less expensive, disposable medical stretchers, also known as a litters.

Rogers said after the drill, he realized how much precious time was lost moving patients from one litter to the next during triage, then again to the ambulance and hospital. The cheaper litters will only last for one use, but time will be saved because the patient will stay on the one stretcher until they reach the hospital.

Another lesson learned is that every agency involved in the drill realized they need to “work on our communications and be on the same (radio) channel,” Wilder said.

Rogers agreed. “Communication at an incident command center is going to be huge.” 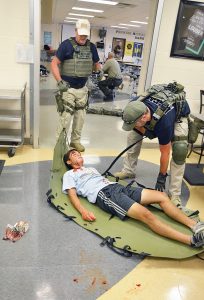 File photo
Officers from the Boyle County Sheriff’s Office begin to transport a “shooting victim” on a medical litter, also known as a strecher where a patient can be pulled to another location.

There is a weakness in communications if EMS staff can’t hear what’s going on with other agencies at the same incident. Rogers said, “Radios don’t always talk to each other. Communication is a weakness.”

Danville Fire Department Chief Ken Pflug said, “Communication between all of the agencies is very vital, from first responders to the hospital, communication is paramount to that. We already knew it, but were putting a test to it. All the pieces were in place and it flowed, but there’s always room for improvement,” Pflug said.

Wilder said this week’s incident involving a potential school shooting that was stopped in Lawrenceburg is a scary reminder that anything can happen at any time. “It was 30 miles from us. Within hours of having a mass casualty. We were that close,” Wilder said. “Unfortunately times have changed. You hold your breath and wonder when the next one is going to be.”

Joni House says there are more benefits out there than people are aware of where restoring their historical properties are... read more