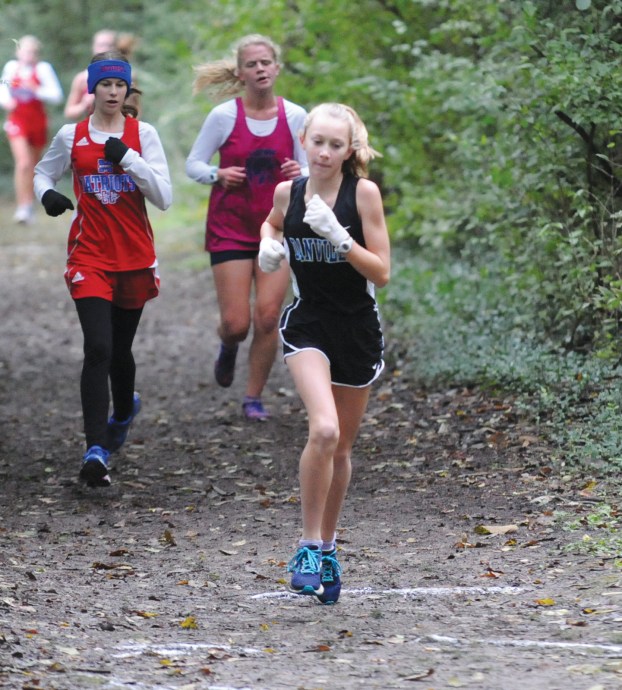 A veteran gave an inspired performance while youth gave a lift to the Danville cross country teams Saturday in the Class A Region 5 meet at Admiral Stadium.

But there were plenty of bright spots in both races for the Admirals: Seniors Lisa Voyles and Claire Strysick put in some of their best performances of the season. Eighth-graders Chloe Strysick, Iain McAlister and Holden McKnight all performed well in their first-ever varsity 5K, head coach Chris Verhoven said.

For McAlister and McKnight, they won’t run at the state meet next week but gained valuable region experience.

“That was one of the goals, put those young guys in there and hope they make a difference,” Verhoven said. “And they did make a difference, even though we didn’t get the result that we were looking for. They gave us a shot of reaching our goal. Seven points, that’s hard. But it wouldn’t have been that close if we chose to not run Iain.”

Cummings said the team was disappointed with the result on Saturday but not their individual performances.

“Iain was a big surprise, he’s practiced with us but never went to a meet and he just blew me away,” he said. “Gabe, he PR’d well too, he’s been running good in practice, too. Overall we all did good, I was really expecting us to go to state as a team.”

On the girls side, Voyles placed fourth overall with a 20:48 time. She entered the race ranked third in the region and was less than a second away from that spot.

“Lisa has been there all year, if anything it’s a good thing from a coaching perspective because she sees what can happen,” Verhoven said. “She was ranked third coming in and she missed it by a fraction. That will eat at her, knowing the athlete that she is. She won’t let it happen next week.”

It was a finish that Voyles called “thrilling,” and she said it was a fun day overall for the entire team.

“That was thrilling, it was a really good race,” she said. “I’m definitely impressed with all my teammates, girls and guys. Chloe came to the high school team and did amazing in her first 5K. I was so impressed with everybody.”

Kiah Earle placed 14th for the Admirals with a 22:33 time, and Verhoven was thrilled to see Claire Strysick next up: She placed 22nd with a 23:31 time, three minutes faster than her run at the EG Plummer Invitational earlier this year.

“Both Strysicks really stepped up,” Verhoven said. “Chloe hasn’t run a 5K all year and she turned into a scorer today. Claire, it’s a great feeling for me as a coach that a senior, running her final race on the Plummer course, she can contribute the way that she did. It did my heart a lot of good and I know that her parents are thrilled to see both of their daughters placing. It was a good way to end her career on this course and to celebrate that with her sister. That was really cool.”

Danville’s girls were nine points away from fourth place and just 16 points from second as a team.

“We knew we were solid, our region was solid and the final numbers proved it, just like we predicted it to be,” Verhoven said. “We ended up fifth but it was tight, we’re still going to state.”

Voyles said she’s got her sights set on a high finish at state, and her team can go out and impress as well.

“I’m just going to go out there, do my best and place hopefully in the top 10. We did really good today as a team, the horse park probably isn’t as difficult of a course as ours. We’ve been there before so we know what to expect.”

Cummings is again going to state as the lone male individual from Danville — and he wants to beat his time from earlier this season at the horsepark.

“I just want to get to my PR or even beat it,” Cummings said. “I know the last time we went there earlier in the year, I didn’t do well so I just want to beat that time.”

Danville’s cross country team could send two teams to the state meet for the first time in a decade. To... read more