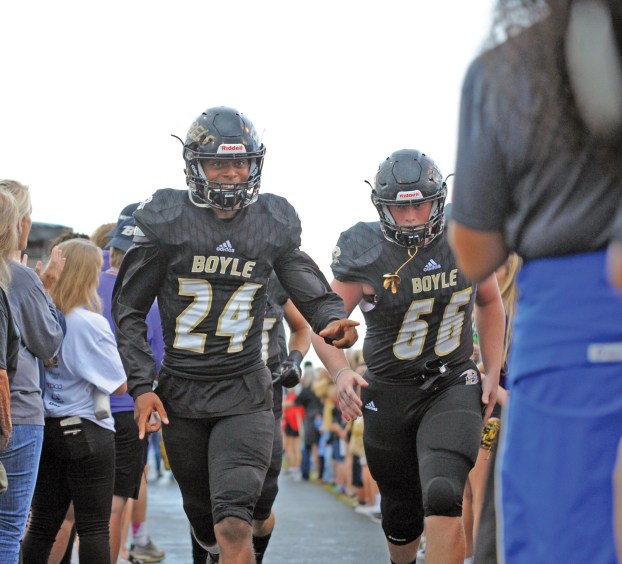 Boyle County’s seniors knew at the beginning of this season just how tough winning a state championship would be.

And that’s not just because they helped the Rebels to a title just eight months before: The schedule was out for the 2018 playoffs, and they called it “The Gauntlet.”

“Run The Gauntlet” is Boyle County’s three-word motto this season, and it’s because of the upcoming postseason run, senior Clay Karsner said.

“We just knew that this year with playoffs, it would be different,” he said. “It’s going to be a gauntlet for us. We’re going to have to practice hard and all come together for this playoff stretch.”

Boyle’s playoff stretch begins Friday at home against 5-5 Floyd Central. After that, it’s likely Mr. Football Wandale Robinson and Western Hills (7-3). Then it’s road trips to Belfry in the quarterfinals, Corbin in the semifinals and a potential matchup with Louisville Central in the state championship.

Based on the latest Associated Press poll, that’s a trip to 3A’s No. 3 team, No. 2 team and No. 4 team in three straight games. Western Hills is ranked ninth in the class.

“Out of all of the top teams in 3A, we’re going to have to play every one of them to win a state championship,” Boyle County head coach Chuck Smith said. “And that’s what (the seniors) said, they said it’s going to be a gauntlet, it’s going to be a hard road, a very difficult road, to repeat as state champions. That’s what their mindset had to be, that’s where it all came from.”

Of course, each team will have to defend its rank in each round, and that starts with Floyd Central for the Rebels.

A potential rematch with Western Hills isn’t one the Rebels can look past, either. Boyle pulled away from Western Hills in the fourth quarter during a 54-35 victory on Oct. 19.

“It definitely was a wake up call for us,” Hatter said. “They gave us a great run for our money, I think it would be a great game. But we’ve got to focus on every game. We’ve got to focus on every player, not just one. That’s sort of what we did, focused on one of their star players and we left other people open. I think it was a real wake-up call for us, we just have to do everything we can to not let that happen again.

It’ll start with the seniors, who went through two second-round exits as freshmen and sophomores before the championship last year.

Senior lineman Ned Stephens said last season’s state title might have surprised some teams in 3A, but this year, Boyle’s not sneaking up on anyone.

“Last year I think we kind of snuck up on some people, the year before we went out in the second round,” Stephens said. “No one really believed we were that good. But this year, they know we’ve got returning starters, they know we can do it. We just want to keep working, work harder than we did last year.

“Right now we all have to come out every day and get better. We know that we have some of the best teams in 3A ahead of us, we just have to work hard and get better.”

The 10 seniors don’t always show up big on the stat sheet — Karsner is a special teams stud, Stephens is in the trenches and Hatter shines on defense.

“Everyone has a role, whether you’re an offensive lineman like Ned  — he has to get the blocks to set up runs for us,” Karsner said. “We have players who are never going to see the field but they’re coming out here every day on scout team, giving us a look to prepare us for the next game. Then special teams, it’s one-third of the game. It really comes big when one of us shows up to play, we’re able to capitalize and get the ball back to our offense.”

Coach Smith said that the class has enjoyed its role and are integral to the team.

“I think they’ve accepted their roles and they’re making the most out of it,” he said. “They know that this is going to be a really difficult run, if we’re able to pull it off. It’s the hardest road you can possibly get.”

The hardest road, and there’s no doubt that it’s Smith’s toughest as a coach. Last year was his sixth state championship with Boyle.

“There’s never been one this difficult. This will be the hardest road,” Smith.

The team is up for the test, Karsner said.

“It’s really going to be a challenge for us, we want to defend our name,” he said. “We want to put our names higher this year and be able to overcome, show our dominance.”

Boyle’s senior class has lost a total of eight games in their four-year high school careers. Seven came in their first two years, and they want to keep that number at eight.

“Freshmen from here to now, it has been a ridiculous ride,” Hatter said. “Not all of our seniors show up on the stat sheets, but every single one of them plays a tremendous part. All of them give everything that they have. After last year, knowing what that feeling is like, you just want it. That’s what drives you.”

Mercer County scored the first two points of the game. After that, it was all Boyle County. The Rebels scored... read more