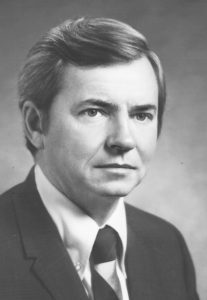 Neal was a graduate of Danville High, class of 1944, then served his country as a Marine in WWII. He had the privilege of marching in the VJ Day parade in Honolulu.

An avid sports fan and participant, Neal loved watching all UK, Centre, and Danville High sports, and participated, every year he was able, in the Butler Golf tournament at Danville Country Club. He also was a frequent fixture at the old pool hall where he had his own pool stick.

He was active in many capacities at the Danville Presbyterian Church, served as a Marine Corps Chaplain, and loved working the hospitality room for the Brass Band Festival. A true people-person, one of his favorite activities was being part of “The Coffee Club” where he and his buddies of all ages would have lively debates over politics and other topics. “Shotgun” is also mentioned in a poem that hangs on the wall at Burke’s Bakery.

Visitation will be at Stith Funeral Home, Danville, Thursday, Nov 1, from 4 pm until 8 pm. On Friday, Nov 2, at 11 a.m., all are invited to attend the graveside service at Camp Nelson National Cemetery with military rites provided by the US Marine Corp and The Caswell-Saufley American Legion Post # 18. The procession will leave from Stith Funeral Home at 10:30 am.