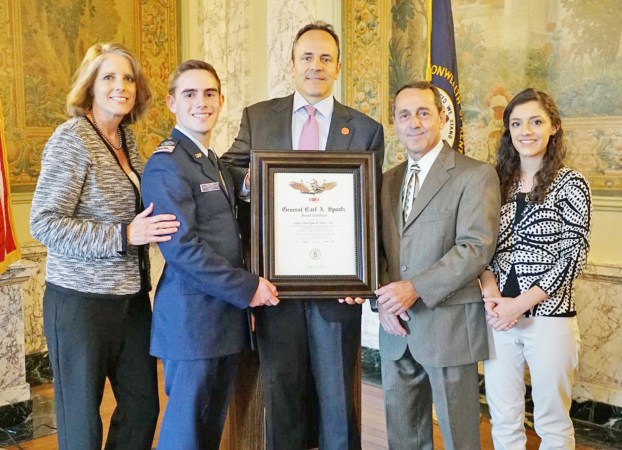 This award is presented to cadets who have demonstrated excellence in leadership, character, fitness and aerospace education.

Hebert says, “My journey through CAP has taken me places I never dreamed it could and given me countless opportunities, memories and friends, ultimately making me the person I am today.”

“Cadet Ryan Hebert has stood out as an exceptional person since we first met in June of 2014,” said Sgt. Cory Felts, director of Cadet Programs for Civil Air Patrol. “Over the next four years, I have had the opportunity to observe this young man develop from a Cadet Senior Airman to Cadet Colonel. Serving with him and mentoring through him at Encampments, NCSA’s, Legislative Day, Region Cadet Leadership School and multiple wing level activities have been a true blessing. Some cadets live the CAP Core Values … this cadet exemplifies those values as his baseline of success.”

In the commonwealth of Kentucky, Ryan is the 20th cadet to have earned the award.

The residents of Morning Pointe of Danville are already hard at work preparing for all of the trick-or-treaters who will... read more