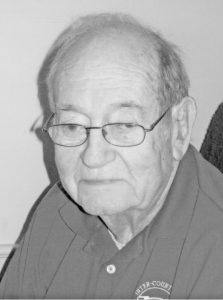 William Eugene McCowan, 82, of Danville, passed away from a long illness on Monday, October 29, 2018.

Born April 16, 1936, he was the son of the late George and Mae McCowan. Eugene proudly served in the United States Air Force for four years. He was retired from RECC, known now as Inter-County Energy and worked there for 38 years. Eugene loved attending Junction City Baptist Church as often as he could until his illness no longer allowed him. He loved meeting new people, and often shared his faith. Eugene loved his model airplanes and putting lawn mowers together. He enjoyed eating breakfast with friends at McDonald’s and Hardee’s.

In addition to his parents, he was preceded in death by his wife, Betty Jane McCowan; two brothers, Samuel McCowan and Delbert McCowan; and a sister, Ethel Long.

He is survived by his daughter, Deborah McCowan of Junction City; a stepson, Kevin (Linda) Rye of Danville; a stepdaughter, Terry (Bennie) Gilbert of Mercer County; his caregiver, Vivian McGirr; and several nieces and nephews.

Memorial donations are suggested to the American Heart Association and the Danville-Boyle County Humane Society. The online guestbook is available at www.stithcares.com.