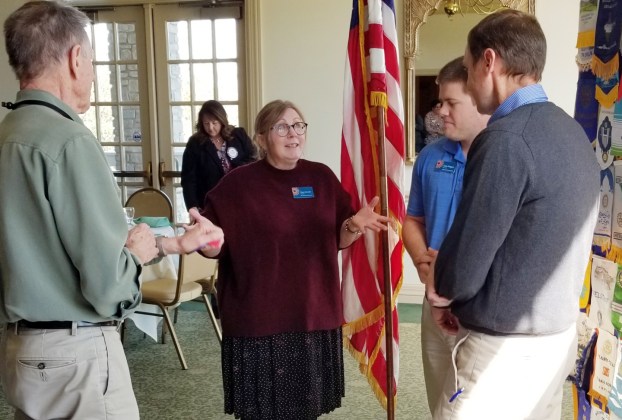 Phil Osborne, the executive director of the Danville Schools Education Foundation (DSEF) spoke to Rotary on Oct. 26. He spoke of commitment to education and to cooperating with the several local organizations with similar interests. The collaborations with other organizations comment referred to:

Osborne hopes to improve the effectiveness of the combined organizational resources through public-private partnerships and more aggressive fundraising to enable addressing a broader range of issues. Osborne commented that he believes that civic clubs such as Rotary can make a tremendous difference in the lives of those in the community, particularly the 70 percent of students in Boyle County living in poverty.

In particular, Osborne spoke about working on early childhood development and hunger initiatives. He also is trying to expand opportunities in Arts and Humanities, promoting achievement through enrichment activities, linking technology to academic success and promoting lifelong learning through scholarships.

To drive home his point about the chronic need for additional funds to help the impoverished students in the area, Osborne quoted a report from the Kentucky Youth Advocates, “Kentucky leads the nation in the percentage of students who live with relatives rather than their parents.” The percentage is more than double any other state. A compounding factor is that Kentucky has the second highest rate of parents who are locked up in the county jail, state or federal prison.

Osborne grew up in rural Appalachia’s “housing projects” in a family living in poverty.  He credited three things that helped him break the cycle of poverty that still plagues many in his extended family: Boy Scouts, music and education. Education was by far the most important then as it remains for him today, in part because his mother and his first wife were and his current wife is a teacher.

Osborne’s commitment to Danville Schools is related in part to his two oldest children attending Danville Schools (even though the family lived in the Boyle County District). During his children’s time in the Danville Schools, Osborne served as president of the Jennie Roger PTO, was chair of the Bate Middle School Site-Based Decision-Making Council and as a volunteer with DHS and Central Office strategic planning efforts.

As of April 1, Osborne became the full-time executive director of Danville Schools’ Education Foundation (DSEF). DSEF was formed in 2005. The vision was to provide a vehicle for individuals, corporations and the foundation to contribute tax-deductible donations to support students and educational programs.  The foundation has always been governed by a board of volunteer community members, including this year’s chair (and fellow Rotarian) Sam Pollom.

Osborne’s early efforts focused on creating specific goals and objectives that would help him achieve his vision for DSEF and the community. More aggressive community outreach, such as the presentation to Rotary was the primary focus. In addition to collaboration with the related organizations, he has also initiated a proactive campaign to improve alumni contributions.

“It all takes money, that’s why I’m starting to shake the trees!” Fundraising will include an annual campaign, which will start on Nov. 27 with the International Day of Giving, and grant requests beyond Hudson-Ellis. Another avenue that will be pursued involves outreach to CPAs, financial planners and tax attorneys to encourage alumni to plan endowments.

In the early years, the foundation survived largely on the generosity of an anonymous donor. Over time, that source has been supplemented by grants from the Hudson-Ellis Fund at the Bluegrass Community Foundation, which contributed $10,000 this year for the schools’ Cradle Program.

The Foundation has also raised more than $100,000 from an annual event called “Dancing with the Danville Stars,” which goes directly to the schools or is awarded to teachers through a competitive grant program.  The foundation has also benefited from proceeds of the Bill Pollom 5K Race, named in memory of Bill Pollom.

Seeds for a new start