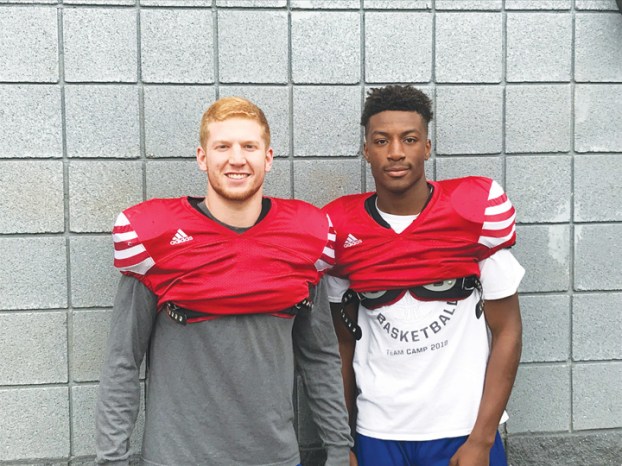 STANFORD — It has been three years since Lincoln County’s last playoff victory.

The Patriots are hoping that changes Friday night when they visit Letcher County Central in the first round of the 5A playoffs.

It has been a huge step forward for Lincoln football: The Patriots are 6-4 after winning just seven games in the past three years combined. It’s the most successful regular season for Lincoln since 2007, and the first time the Patriots were the 3-seed in District 7 since 2015.

Who’s behind the Patriots’ resurgence?

“I definitely thought we were capable of this, we have always had the talent, we were just missing something,” senior quarterback Bryson Yaden said. “I think coach Crutchfield just brought in a new culture and energy that we needed.”

“I always knew we had the ability to be good, we just needed something to spark it,” he said.

Yaden and Napier have combined to be a stellar duo for the Patriots: Yaden, a four-year starter at quarterback, set the career record for passing yards at Lincoln County this season.

Napier has been the Patriots’ go-to playmaker this year, scoring 16 touchdowns and accumulating 1,337 yards through the air and on the ground in 10 games this year.

“I came in and you always want good senior leadership,” Crutchfield said. “I’ve definitely relied on those guys to get what I want across to the team. Especially with those two being big playmakers for the team, we’ve got young guys looking up to them and they’ve both taken on the role as leaders this year.”

“The expectations are definitely higher this year, I think,” Yaden said. “That’s the mindset that coach Crutchfield has, he doesn’t want us to settle for anything less than what we’re capable of doing.”

Crutchfield said his expectations coming into the season weren’t about wins and losses.

“It’s hard to say what you expect as far as wins and losses, what I expected was for our kids to buy in and to play hard and do things the right way,” the coach said. “That was my expectation going in. Did I think we would win six games, it’s hard to say yes or no, where we’d be at. But I’ve been proud of these guys, how they bought in and how they play hard. We’re not always the most talented team out on the field but we play hard and that’s what I preach. If we do that, I feel like we have a shot to be successful.”

Players have bought in, and the Patriots are seeing the community buy in as well. Yaden said there has been an anonymous donor provide a pep bus for students who otherwise wouldn’t be able to attend road games.

“The community is behind us now more than ever, it’s awesome being out there on Friday nights, they’re traveling with us and everything,” Yaden said. “It’s awesome, the support they give us … A lot of the students don’t get to go to these places or even get into the game. For them to travel and get to go to the game, that’s awesome.”

“I didn’t expect the student support when we started playing, and it’s just gotten bigger and bigger. It feels great having all of the students behind us,” Napier added.

Napier and Yaden have grown together in the last two years, when Napier joined the team. The two share a bond that goes beyond the backfield.

“It’s an honor, it’s my brother I’m back there with,” Napier said about his record-breaking quarterback. “It’s just an honor playing with him, he’s my best friend. I’m just happy to see him succeed.”

“He came here two years ago, he was shy then, wouldn’t talk to nobody,” Yaden said of his star running back. “Now he’s one of my closest friends. Just handing him the ball and watch him run, there’s no better feeling.”

Yaden was the starting quarterback as a freshman when Lincoln went to Harlan County and won 40-35 in 2015. He wants to bring a win back to Stanford again this year.

“That atmosphere at Harlan County, winning and coming back home, there was nothing like it,” he said. “If we win this game, we’ll probably have another shot at Pulaski and that’s what we want. We want them again.”

To do that, Lincoln will need buy-in from every member of the team.

“We definitely have to stay focused because we can’t get big-headed, just because we’ve had a successful regular season,” Napier said. That won’t be good for us, that doesn’t matter to us now. We’ve just got to stay focused.”

The two seniors said that younger players have done well to buy in this year.

“Sawyer Carrier is another captain and he’s done a great job of leading this team,” Yaden said. “I think all of the younger guys are starting to buy into the mindset that we have here now, and that’s the most important thing about carrying it on way past when we leave here. I think they’re starting to get a good grasp of what we’re trying to do here.

“I think we’ve set the standard at least for what it needs to be, they’re the only people who can control what happens now. But we’re not done yet, we want to continue to build that standard and build on what we’ve got here.”

“This is the part of the season that we’ve talked about since the beginning of the year,” Crutchfield said. “We’ve tried to take care of business, give ourselves the best opportunity to have a shot to win games. We have the three seed, Letcher County Central is a good team but hopefully we’ll be able to go 1-0 this week and continue that on. That’s what I’ve been preaching now, we have to go 1-0 each week. If we’re able to do that, we’ll keep playing and that’s what it’s all about. This part of the season is what we’ve been building for all year. Hoping our guys have the right mentality going in.”

West too much for Rebels

SOMERSET — Boyle County’s girls soccer team gave a top-10 team all it could handle on Saturday in the 12th... read more