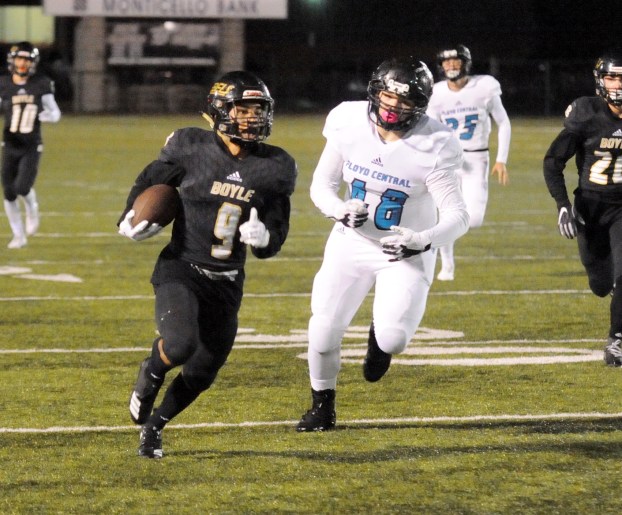 It didn’t take long for the Rebels to set a running clock and earn a 49-0 victory in the first round of the Class 3A playoffs.

“It set the tone, that opening  kickoff set the tone for the game,” head coach Chuck Smith said. “Our guys really got after it and just did a really nice job of approaching the game, setting the tone and doing the job we wanted them to do.”

Boyle County led 21-0 after just two plays on offense. Reed Lanter threw to the flats twice — first to Reiley Colwick and then to Reese Smith — for two touchdowns, and Colwick had a punt return score as well in the first quarter.

Colwick finished with two catches for 48 yards and those two touchdowns.

“I just try to do whatever I can to help my team win,” Colwick said. “I’m just looking for a block or two, really just open space. Once I see that, I make a move and don’t look back.”

The special teams set the tone early, the offense and defense followed. It was a total team effort, coach Smith said.

“We came out and I think the guys had a good week of practice all week long,” coach Smith said. “They came out tonight and really got after it. It was a good performance.”

Colwick said he felt like the team played as a cohesive unit for the first time all year.

“I think for the first time all year, we played for each other,” he said. “Coach told us in practice that he saw a difference and us as players, we definitely saw a difference. We’re working as a unit more than individuals. I think that’s’ a good base for a team wanting to win a state championship. We’re on the right road.”

Lanter was on point all night, throwing another touchdown to Reese Smith in the second quarter. Tanner Crawford added a 39-yard run and the Rebels put on a running clock with just 16 minutes of game action.

Crawford led the Rebels with eight carries for 126 yards and a score.

By the end of the first half, Boyle’s second unit was in the game. Coach Smith said he liked the way his team responded to Floyd Central’s physicality — something they’ll see in the next round against Lawrence County.

“They’re usually big, strong teams and like the physical part of the game,” he said. “Belfry is of course really strong and they’re probably the king in the mountains and they’re the one everyone judges their program by. Those are the teams that come out of there.

Boyle County’s seniors knew at the beginning of this season just how tough winning a state championship would be. And... read more