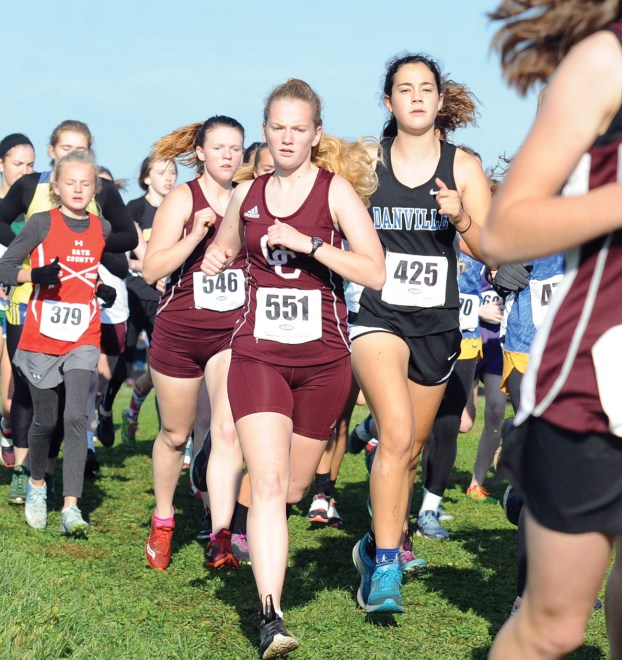 LEXINGTON — Danville’s cross country season finished Saturday at the Kentucky Horse Park with the state meet, and the Admirals saw times drop.
The team finished 15th in a field of 243 runners and 32 teams.

“It was a great day, good weather. The course was a little nasty but it was a good run,” head coach Chris Verhoven said. “When you have half your team run a PR and the other half run right where they should, you can’t complain. I was really pleased.”

Senior Lisa Voyles finished her first and only season as a cross-country runner with a 17th place finish. Her time (21:04) wasn’t her best, but for her first time at the state meet, Verhoven said she ran well.

“It’s intimidating, the state meet is the state meet. It’s always good experience that she hasn’t had it,” the coach said. “She had a good day but it wasn’t her best day. I think she’s been in some pain recently, no excuses from me or her, she ran the best she could. I would’ve liked to see her in the top 10, that’s where she’s been most of the year. But she ran a great meet today.”

“Kiah definitely PR’d, Chloe crushed her PR,” Verhoven said. “I think Holly (Helmers) was right around her normal time, as was Claire (Strysick). Overall, we were 15th. We talked about it all year how tough our region was this year, LCA was the state runner-up. We were fifth in our region and we had five of the top 16 teams in the state. We moved up, in a way, one place from the region.”

“Experience is always helpful and when you have seven runners, only losing two seniors, and the rest are four freshmen and an eighth grader,” Verhoven said. “How much difference would it have been if Lisa Voyles had experience of the state meet? We’ll never know. But I think that experience pays off and it helps create unity when you have four or five girls that can say, ‘hey, we’ve done this every year.’ Every year you build on that.”

Danville had one male runner qualify for state, Jesse Cummings. He finished 263rd in a field of 286 with a 23:16 time.

“Our running joke all week has been ‘hey girls … and Jesse,’” Verhoven said. “His name isn’t Jesse anymore, it’s ‘and Jesse.’ When we take pictures at school, ‘and Jesse.’ Dinner last night, ‘girls and Jesse.’ Unfortunately he had asthma issues today. It just wasn’t his day, asthma is hit or miss. Chloe has asthma and she had her best day ever. That’s sports. There’s a lot of luck involved. We didn’t have a ton of luck today but we had hard work and we saw the hard work pay off throughout the season. We placed where we’ve been all year and ended on a positive note.”