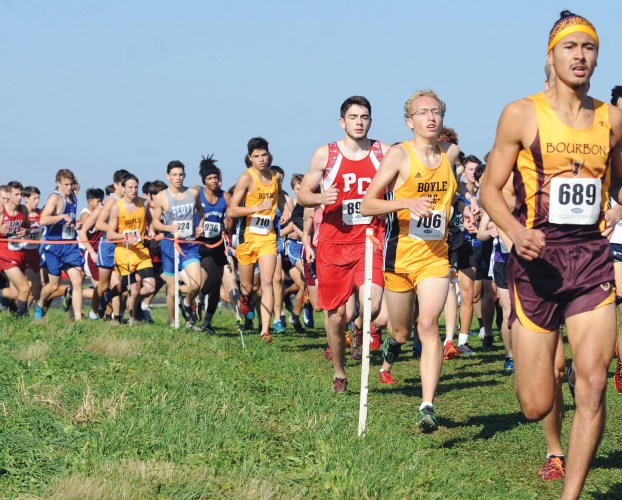 Team unity: Rebels finish third as a team for second year in a row

The Rebels have been led by a fierce foursome of runners throughout the year, and that four again showed their strength Saturday at the Kentucky Horse Park in the state meet.

“I’m just incredibly blessed to have the team that I have, we’re like a family,” Harless said. “We’re so close. I’m just happy that I’ve got the opportunity to run with this band of brothers. It was a great way to close it out.”

Lafavers has used one phrase all year to describe his team.

“It’s all thanks to team unity,” he said. “Everybody works together, we’re one unit. You can count on everybody equally.”

Head coach Donna Anderson said that team unity has made it incredibly easy to coach her team this season.

“They’ve been working hard, really nonstop,” she said. “They worked out in the summer before last year, ended up third. Then they took a little time off, but they kept running straight through track. Then took another break and were back at it again this summer. I think you’re seeing the cumulation of that training. It’s paid off. It helps them to have those people to train with, that motivation and interest and spirit.

“It’s huge. It has been fantastic to coach this group because they’re fun to be around, they enjoy each other. If you look at the whole team collectively, it’s an interesting mix of kids that make it work. That’s the cross country environment at its finest.”

The runners share motivation: Cox was fading in the last half-mile before Lafavers gave him a boost.

“That last stretch, I was really dying,” Cox said. “Then Will came up and almost passed me and it just gave me a huge energy boost. That’s what he means by team unity, we’re always running together.”

“There’s no one person that carries this team, we’re all right there,” Harless added. “We all work together and encourage each other, push each other to do our best and leave it all out.”

Those four couldn’t have done it without their fifth runner: Senior Robert McClellan again set a personal best time for the second week in a row, running a 19:22 to place 135th.

That time is almost two minutes faster than his time at the Boyle County Invitational (21:05) just six weeks prior.

“It’s crazy. We did it last year, this year we didn’t have as complete of a team, we struggled with our fifth man this year but just coming out and grinding it out here proves that we’re the good team that we’ve always been,” Cox said. “Bobby was our fifth runner, he dropped two minutes. That’s insane. He knew what he had to do and he did it. He contributed to the team unity.”

Coach Anderson pointed to the Greater Louisville Classic, held on Sept. 28, as the turning point for McClellan.

“At our invitational he was right over 21 minutes. We knew going into the Greater Louisville Classic meet, he knew it’d be his biggest meet ever,” she said. “We took a gamble, told him to just go out really hard and keep Seth and those guys in your sights. Because you can’t go out too slow or you’ll get swallowed up, there’s too many kids. Just go with the crowd, just go, don’t think, just run. Pass people and run. It paid off. That was his breakthrough, he hasn’t gone over 20 minutes since.”

“After region, he laid it on the line,” coach Anderson said. “He was kind of out of it, then at the beginning of this week I told him, ‘you’re going to have to do that again.’ He truly looked at me like, ‘are you serious, I’ve got to do that again?’ For him to step up and do that, knowing he was going to hurt, to come through, he can hold his head high and be proud of what he’s done.”

The senior class can be proud after its third-place finish in a field of 254 runners and 32 different teams, Stomberger said.

“Definitely the last 100 of the race got to me, thinking about how it might be my last cross country race ever,” he said. “But I definitely wasn’t expecting third, we all just pushed super hard. I just love my team so much. We push each other really well, in workouts and races, practice, everything. We work together.”

Boyle girls finished 20th in a field of 30 teams and 236 runners on Saturday.

“We were ranked 23rd coming in and we finished 20th, so we moved up,” coach Anderson said. “Region was a wild ride for us, we came in fifth and were just six points away from sixth. I just said, ‘there’s no option, you guys are making it.’ And all of our girls performed well that day. Everyone was solid. Other team’s misfortunes boosted us up.”

The Rebels were without leading runner Ally Anderson, who has missed this season with an injury.

“I’m proud of Ally for how she handled this season, it was rough being here today for her but she has given them so much support over the season,” coach Anderson said. “That was good for her and the team.”

Boyle County’s special teams set the tone from the opening kickoff against Floyd Central. It didn’t take long for the... read more