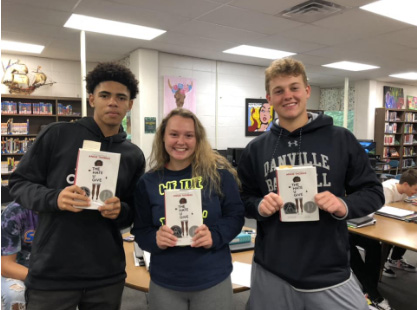 “The Hate U Give” is now a major motion picture that has gotten a lot of media attention due to its handling of police brutality, race relations and the Black Lives Matter Movement. However, what many may not know is this theatrical hit started out as a novel written by Angie Thomas. And although the book is less than a year old, schools like Danville High School can’t keep enough copies on their shelves. While students seem to be eager to dig into this novel, some adults wonder if the controversy of the book makes it unsuitable to read in school. 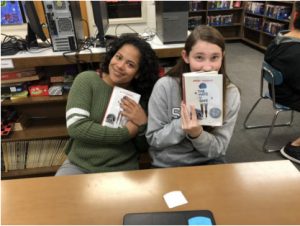 Photos contributed
Seniors Lilly Dalton and Ale Nieto-Young took part in the book club to discuss the novel with their peers.

At DHS, seniors in Jennifer Shearer’s and Derek Otto’s English IV classes are reading the book. When asked why he decided to teach the book, Otto said, “I wanted to find a way to have a conversation in my classes about the issues surrounding the protests. I have always felt that it is important for students to have real conversations about current topics in an academic setting.”

Similarly, Shearer thought the book was important for students to read. When she was asked why she picked the book she said, “This book was on my personal summer reading list and, after reading it, my first thought was, ‘Wow! I have to read this with my kids!’ I found the book to be so well-crafted and thought-provoking, so I wanted my students to experience that, too.  I knew it would get the kids engaged, but more importantly, it would get them thinking.”

The students I sat down and talked with agreed that this is an important book to read because it shows real world problems. In the book, students also see similar problems that the book talks about in the real world and in our community. One senior, Nautika McPherson, said she saw issues like “crime in poor places, police brutality and racial profiling” in her own community.

Amber Wheat, another senior, appreciated the perspective the book gives readers. “You really learn that what happens in the books, happens in our real world — such as police brutality, racism — and it also follows the perspective of a teenage girl. People don’t understand what it is like to go through what we go through.”

However, some students said they did feel a bit uncomfortable discussing the book. When senior Daniel Ungs was asked about the discussions, he said, “I don’t want to say something to offend anyone.”

On the whole, DHS students do think this is a necessary book to read. Senior Jacob Crank said, “… this book brings up issues in society that other books don’t bring up.”. 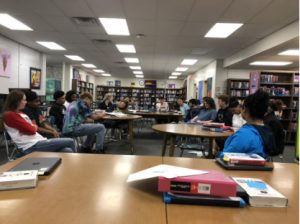 The students have overall enjoyed the book and they appreciate the school for trusting them to be mature enough to read it. Amber Wheat added that she felt it was good that “Danville High School had trust in us to deal with these topics.”

Danville High School demonstrated their trust in our students by allowing them to read such a controversial novel. They expected that our students would read this book and handle it like adults, which they did. I think more schools should follow in Danville’s footsteps by reading this book. This book shows real world problems that need to be discussed. The classroom is a perfect place to do so.