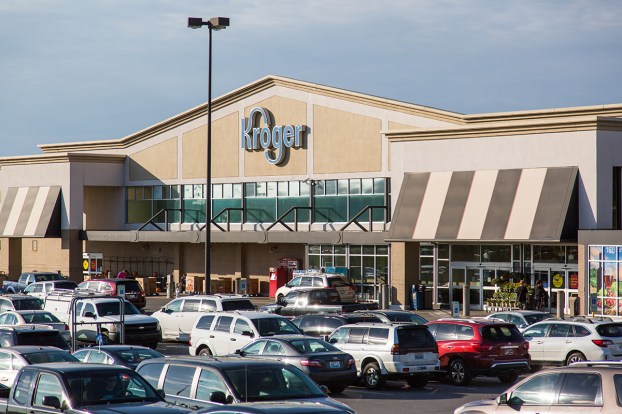 (File photo) Kroger wants the 2016 valuation of its Danville location lowered from $5.5 million to $2.75 million. The Kentucky Claims Commission backed the $5.5 million valuation in an order last year, but Kroger appealed and now Boyle County Circuit Court Judge Darren Peckler has remanded the case back to the KCC to be heard again. At stake is an estimated $37,000 in property taxes, the bulk of which would go to the Danville Independent School District.

The battle over how much the Danville Kroger property is worth is not over yet, and Boyle County’s Property Valuation Administrator says a lot hangs in the balance for local taxpayers.

PVA Eddie Tamme won another round of the fight over the property’s value in September, when the Kentucky Claims Commission (KCC) again ordered that his $5.5 million valuation of the Kroger in 2016 was appropriate.

But Kroger has now filed a new petition for judicial review in Boyle County Circuit Court, alleging the KCC “seriously mischaracterized the evidence that Kroger offered” that its property should only be worth $2.85 million — about 51.8 percent of what the property was valued at from 2014 through 2016.

About $37,000 in annual property tax revenues for local taxing districts is at stake in the case, a majority of which would go to the Danville Independent School District, according to previous comments by Boyle County Judge-Executive Harold McKinney.

The Boyle County Fiscal Court paid local attorney Stephen Dexter to represent PVA Tamme in the original case. Tamme said last week he’s only now been given the OK from Dexter to speak publicly about the case, now that a final order has been issued by KCC.

But when Kroger came to Tamme, “I rejected their appraisal,” he said. “And I rejected it primarily on the basis that in bold print, the appraiser stated that the appraiser has made the assumption the facility was vacant and available for sale or lease. Well, everybody knows that the Kroger facility is not vacant. It’s an ongoing business. In the appraisal world, the term they use is ‘dark.’ It’s not a dark facility.”

A statement filed by Dexter in the case made much the same point. Kroger “is a thriving retail food center with a gas inland and prime location on the U.S. 127 Bypass with heavy traffic of nearly 22,000 vehicles per day,” Dexter wrote in defending Tamme before the KCC. “… (Kroger’s) appraisal was far from compelling and is much better characterized as inadequate.”

Tamme said Kroger later came back and amended its appraisal to account for the property not being vacant by increasing the value $100,000, to $2.85 million. That $2.85 million figure is what Kroger has been paying taxes on ever since, while the legal case is underway, he said.

Tamme said he has fought the case not for the $37,000 or so in property taxes that may be owed, but because of the precedent it could set for other commercial and industrial properties who want to pay less in taxes. If Kroger is successful, its property will be valued at about $44 a square foot instead of around $88 a square foot, he said.

“If we took the easy way out or the lazy way out and said, ‘Hey, let’s just compromise,’ then guess what? The next year, of course Kroger will get that same (savings), and the following year and the following year — but look at all the other businesses,” he said. “They’d say, ‘You gave in and they’re at $44 a square foot? That’s half of what their assessment was? Cut ours,'” Tamme said. “… It shifts the tax burden over to the citizens of Boyle County.”

When property tax rates are set each year, taxing districts set the rates based on what revenue they received the previous year. That means if total property values go down, the tax rates often go up in order for the taxing districts to receive the same amount of revenue.

Tamme said all of Boyle County’s commercial and industrial properties are valued at a total of about $466 million. If Kroger gets to keep its $2.85 million valuation, that “erodes our tax base” and “forces the citizens of Danville and Boyle County to pick up the difference,” he said. “Look at the ramifications it has for our tax base and look at who suffers.”

Kroger first submitted an appeal of its valuation in May 2016. The Boyle County Board of Assessment Appeals affirmed the PVA’s $5.5 million assessment on June 20, 2016, effectively denying Kroger’s appeal.

Kroger filed a letter in support of its case the same date of that hearing, stating the property is 7.03 acres and the main building is 62,295 square feet.

“Kroger has concluded that this store is at the end of its economic life and that it no longer properly serves its customer base in the area,” the letter reads. “As a result, Kroger intends to replace this store in the very near future. The appraisal submitted to this board was requested as part of Kroger’s review of the property.”

In mid-May of this year, Boyle County Circuit Court Judge Darren Peckler agreed with one of Kroger’s arguments in the case — that the Kentucky Claims Commission failed to comply with the law when it ordered last September that the PVA’s valuation should stand. Peckler remanded the case back to KCC and required it to “provide specific findings regarding its rationale” for upholding to PVA valuation.

On Sept. 25, KCC did just that in a four-page order, once again upholding the $5.5 million valuation. According to KCC, PVA’s assessments have a “presumption of validity” and “the burden is therefore upon (Kroger) … to prove that the presumptively correct valuation assigned by the official was incorrect.”

“Other than opinion evidence that calculating the lifespan of the structure and expressing and analyzing depreciation were difficult, the record is devoid of evidence that the methodology adopted by the PVA was flawed, improperly applied or otherwise faulty in its calculations,” the KCC order reads. “… None of the evidence offered by (Kroger) established that the PVA’s appraisal was invalid. Rather, the evidence merely offered alternative opinions of value.”

But the KCC’s final order was not the end of the story.

Kroger rejected the reasoning in KCC’s order in a petition for judicial review it filed in Boyle Circuit Court on Oct. 23. Kroger argues KCC incorrectly gave weight to the PVA’s assessment, when the two valuations should have been compared on equal footing.

“Kroger was entitled to forward its own appraisal evidence to show that the PVA’s assessment was incorrect,” the petition reads. “And, once it did so, the hearing officer and the KCC were required to at least consider it. Indeed, once Kroger came forward with its appraisal evidence at the administrative hearing, any presumption that the (PVA’s) assessment was valid ‘disappeared …'”

Further, KCC violated Kroger’s due process rights and “seriously mischaracterized the evidence Kroger offered,” the petition reads. “… Kroger offered objective evidence establishing that the cost-approach valuation relied upon by the PVA is based on at least 2-year-old data, which means that it is not probative of the property’s value as of Jan. 1, 2016, because it is not ‘current.'”

Kroger argues KCC’s order is “arbitrary, capricious and an abuse of discretion” and asks the circuit court to reverse the order.

Kroger has also appealed its 2017 valuation; that case is being held in abeyance until the 2016 case is resolved.

Voter turnout may be strong in Boyle Tuesday

If the volume of candidate signs in residents’ yards in Boyle County is any indications of possible voter turnout on... read more