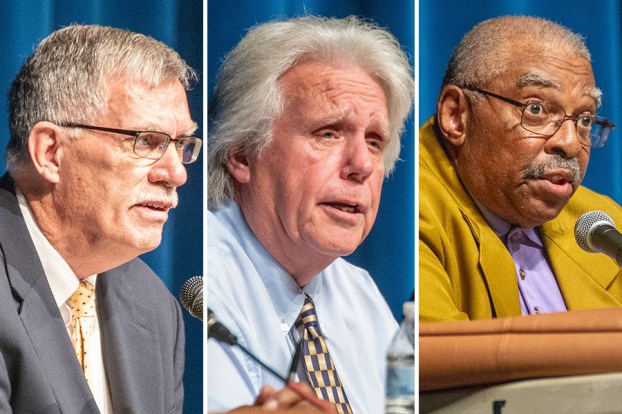 From left, Paul Smiley, Steve Becker and Glenn Ball were elected to the Danville school board Tuesday. (File photos)

Third Danville school board seat decided by one vote

The Danville Board of Education race in Tuesday’s general election was decided by the narrowest possible margin.

According to the vote totals from the Boyle County Clerk’s Office, Glenn Ball beat out Aaron Etherington for the third seat on the school board by just one vote.

“I know it probably shocked a lot of people that Glenn Ball came in third by one vote. I think it shocked him,” said Steve Becker, who received the second-most votes overall.

Ball said he plans to work on improving test scores “for all students” and making sure students have good access to vocational schools.

Ball said he plans to use “straight words” with voters and “keep everything out in the open … be transparent and be honest with people.”

“Congratulations to all the candidates on a positive, well-ran campaign,” Etherington said in a statement Wednesday. “As a parent and community member, I will support the newly elected board, and continue to advocate for our students and district. Our district is very special and will continue to progress and prosper under the elected leaders. I am very thankful for the support that I received during my campaign. It has been an outstanding experience.”

“I didn’t have any idea, I just hoped that I’d be in the top three so I could serve again,” Smiley said. “When it broke that way (Smiley receiving the most votes), I certainly was very pleased.”

Smiley said all five candidates were good choices and the two who won election with him — Becker and Ball — are “outstanding people.”

“I think if I had to come up with reasons I won, I thought that being able to do ads in the newspaper plus letters to the editor — people put in kind words. I thought that was very successful,” he said. “And I think being on the school board before for 13 years — people know me.”

Smiley said he ran “to help the students in Danville Schools to achieve academically — that was the only reason, there was no second or third reason.”

Becker said he believes all of the candidates running would have made excellent school board members.

“We’ve got a great bunch and it’s a diverse group, as far as backgrounds and education, but I know we all have the same desire and that is to restore confidence in the community for our school system and do the utmost best for our kids,” Becker said. “… I’m excited. I feel like I’ve been elected to the school board all over again for the first time. We’re going to do great things — I just know it.”

The fifth candidate, Michael Strysick, received 1,368 votes, about 15.4 percent. Strysick said running for the school board gave him the chance to meet lots of people in the community, “and to make lots of new friends, including my fellow candidates.”

“While I had hoped for a different outcome, I wish every success to the board members elected,” Strysick said. “I feel confident the Danville school board will be in good hands.”