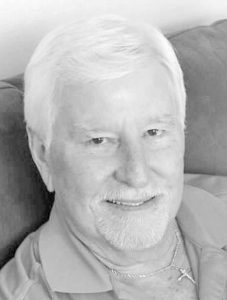 Born December 10, 1930 in Evansville, Indiana, he was the son of the late Tilford Russell and Sylvia Sewell Settles Baker. Jim was a member of First Christian Church. He was predeceased by his wife of 52 years, Virginia “Ginny” Campbell Baker.

He was a graduate of Central High School in Evansville and was drafted by the White Sox and Cleveland Indians. Taking his father’s advice he delayed his baseball career, hurt his shoulder and played for a semi-pro team in Evansville. He was a veteran of the Indiana National Guard and worked at Serville then joined Whirlpool Corporation. He retired as a material control supervisor after 33 years. In addition to baseball he was an accomplished hunter, fisherman and golfer and was an active member of The Central Kentucky Senior Golf Association. He loved to watch the horses run at Keeneland, Ellis Park and Churchill Downs and was an all-around avid sportsman.

Memorial donations are suggested to First Christian Church or Heritage Hospice. The online memorial page and obituary are available at www.stithcares.com.