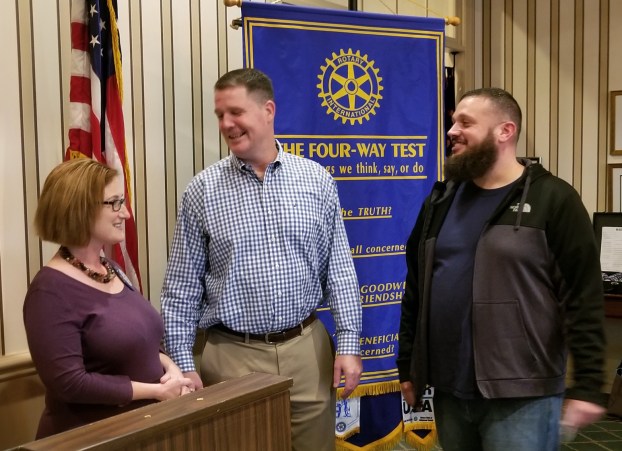 Photo contributed Shepherd’s house leaders spoke to the Danville Rotary on Nov. 2 about treatment programs devised by the agency.

Jerod Thomas, M.Ed., certified alcohol and drug abuse counselor (CADC), president and CEO of Shepherd’s House, and Roger Fox, program director and Intensive Outpatient Program (IOP) counselor for Boyle and Mercer counties spoke to Rotary on Nov. 2. Both Thomas and Fox, and most of the Shepherd’s House employees have had drug, alcohol or mental-health problems. Rotarian Lynne Dean, Boyle County Attorney, joined them during the question period.

Thomas got his treatment career start in Boyle County when Barry Harmon, jailer at the Boyle County Detention Center, asked him to help develop and then run a drug treatment center for Boyle County.  The county’s incarceration rate was a driver for creating a treatment center. Harmon knew that a new jail was not affordable. They both concluded that treating the 85 percent of the inmates with drug, alcohol or mental illness problems was a better approach.

Harmon pulled jail files and both men began to look for causes and alternative solutions. Later, Brian Wofford, Boyle County Sheriff’s Office retiree, joined the jail team. During his law enforcement career, Wofford worked with the DEA and the Kentucky State Police on drug enforcement task forces. The three men concluded that the situation was more complex than initially thought and needed broader agency involvement. Harmon invited Dean and Mary Conley from the fiscal court to participate. Ultimately, a program was developed that, although tailored to the Boyle County processes, could probably be tweaked for use in other counties.

The primary objective of the program was to make a difference in the inmates’ lives while saving the county money.  The reasoning was, “every time you put somebody in jail it costs $32 a day and a treatment program could be implemented for about $13 a day.”  In late December 2016, Boyle and Mercer fiscal courts agreed to fund an intensive outpatient treatment program to reduce recidivism and eliminate overcrowding at the Boyle County Detention Center.

That program was so successful Thomas has since created three others, including a prison treatment program in Cook County for the mayor of Chicago. Chicago’s 2,100-bed capacity is largest prison program in the United States. It was patterned after the Boyle County program. Other significant projects Thomas has worked on include an HIV-only treatment center in Miami and a homeless treatment center in Las Vegas.

After returning to Lexington to become CEO of the Shepard’s House program, Thomas put Fox, his “star” pupil, in charge of the Boyle County program. The Boyle County program is the first ever Community Action Recovery Program. It has not received any grant funding. Not only does it treat recovering addicts, it does a lot more. There is an adult education program, an employment program and a community service program. An outside provider is employed to help with mental health issues.

The second speaker was Roger Fox, the Boyle County program director. Fox highlighted the reasons for treatment center’s success. He began by saying that their success could not have happened without the cooperation and support of related organizations like the county attorney’s office, the jailer and the fiscal courts. He also credited the policies developed over the past two years, screening with the county attorney for commitment to recovery, and tailoring available programs to meet the individuals’ needs.  That tailoring has been extended to GED classes to help getting employment and parenting classes to help parolees reunite with their families. “What we are really doing is building a path to a successful, sustainable lifestyle.”

Asked what future changes he would like to see, Thomas said, “We have access to the jail and courthouse through the front door, but we are trying to open some back and side doors.” He noted that better background information and contact with a person before they are released could lead to earlier development of good daily living skills. He specifically noted the need for earlier and continued access during the legal process, to avoid additional charges.

Asked if digital technology could help with diagnosis, education or monitoring for success, Thomas responded: “We are designing an app to monitor every parolee’s location 24/7 and providing that information to every agency on a real time basis thereby permitting rapid intervention if required.”

Governor’s School for the Arts info session and workshop Saturday

KENTUCKY CENTER News release The Kentucky Center Governor’s School for the Arts will have an info session and prep workshop... read more