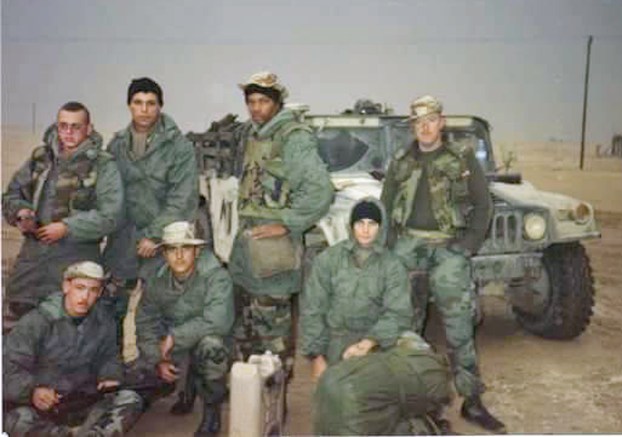 Photos contributed Brian Wofford, second from left on the front row, poses with a group of his fellow Marines during Desert Storm.

One of Boyle County’s many military veterans is newly elected Boyle County Jailer Brian Wofford. He began his law enforcement career as a 19-year-old U.S. Marine during the Gulf War in 1990.

Wofford grew up in Boyle County. When he was a student at Boyle County High School, he was living with his grandparents. Then at 16, his mom was killed in a car accident.

He graduated BCHS in 1988 and enrolled at Eastern Kentucky University. He said his dad was recovering from drug addiction at the time and he had enrolled in a Lexington college too — father and son were freshmen at the same time. However, his dad relapsed and died from an overdose.

Wofford said he stayed in college for a year and a half before quitting and joining the U.S. Marine Corps Reserve for two reasons — he wanted to serve his country and “it also helped put me through college,” thanks to the GI bill. 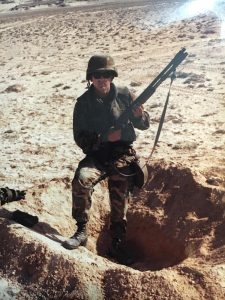 His family was very supportive of his decision to join the military, Wofford said, and they tried to encourage him toward joining the Air Force, but he chose the Marines. He had an uncle who had served as a Marine during Vietnam.

“I was a 19-year-old kid and the discipline that I received of being in the Marines has served me well.”

Wofford went for basic training at Parris Island, South Carolina, then to Camp Geiger, which is part of the Marine Corps Base Camp Lejeune in Jacksonville, North Carolina, for more intense infantry training.

From there, Wofford went to Lackland Air Force Base in Texas to enter the Infantry Military Police Academy.

Wofford said he chose to pursue the military police field because 95 percent of the jobs he qualified for after taking the ASVAB test pointed him in that direction.

“I had no idea I’d end up in law enforcement.”

After completing infantry training, Wofford signed up for the Marine Platoon Leader Course, which would take place for the next two summers, making him a commissioned officer.

Wofford returned to EKU to finish his bachelor’s degree and was there only seven days when he received word that his unit had been called for active duty because of the Persian Gulf War.

“Before I left, my uncle, who was a Marine in Vietnam, took me out to dinner and kind of talked to me a little bit. And that was the first time and the last time he’s ever talked anything about combat. He helped prepare me.”

Within seven days, Wofford flew with his unit to Camp Margarita in California and began training for Desert Storm operations. There, they learned about tactical urban warfare, involving entering structures and rappelling down tall buildings to enter through windows. 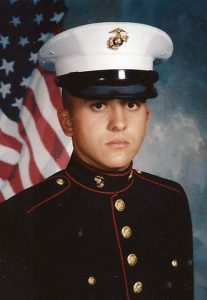 Brian Wofford joined the U.S. Marine Corps Reserve when he was 19 years old.

At the time, Wofford said, he was 19, so it was all a new adventure for him. “I didn’t know what to expect” during a war.

More training took place in Hawaii before he shipped out to the Philippines, where the soldiers learned how to set up beach perimeters and practiced security maneuvers during amphibious and air assaults.

From there, they went to Oman for more training. They practiced putting on chemical suits because of the threat of chemical warfare. These maneuvers took place during the middle of the day in the desert, when it was extremely hot, Wofford said.

“There was a lot of times I’d rather have been back at EKU,” Wofford said.

They eventually were sent to the Persian Gulf, where the troops waited in their ship. “We were part of the initial group that was going to hit. They really anticipated high casualties at first.”

Asked how he felt knowing many of them were expected to be killed, Wofford said, “You just can’t think about it. You just have to rely on your training and rely on the man to the left and right of you. And them relying on you. You just make sure you’re doing what you’re trained to do.”

But at the last minute, Wofford said his group was used as a distraction.

“So the ground war started. And then there were so many ships to unload, we unloaded on the second day.”

“Then we did convoy security from there up to the front lines” in Kuwait.

Wofford also went on patrols through bombed villages and saw where the people had bunkers. “It was amazing some of the stuff they had dug in. You couldn’t see them from the air, but they had communication vehicles, ammunition depots underground, so we had to clear those.”

There were also lots of unexploded bombs everywhere and some hostile people still around, Wofford said.

“The only thing I was thinking about was what was going on at that moment. It was surreal. You’re just concentrating on what you’re doing. But in the back of your mind — ‘Will my next step could be my last step?’ And the next building that I enter could be the last building that I enter. You just have to put that aside and complete your mission. Protect yourself and those you’re serving with.”

Wofford said the experience taught him to appreciate life and “How blessed I am to be an American.” 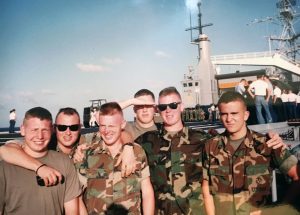 He said while in the Philippines, the people would use boxes leftover from from the troops’ equipment and meals to make huts. And they begged for food, Wofford said.

The soldiers tried to help the adults and kids by giving them money and candy bars.

“It definitely matured me … when it was over and I came back, I had a whole different outlook,” he said. “It made me very grateful … for being a U.S. Marine.”

On Tuesday, Howard Hunt was elected Boyle County’s next judge-executive. On Thursday afternoon, he was unemployed, living at home with... read more