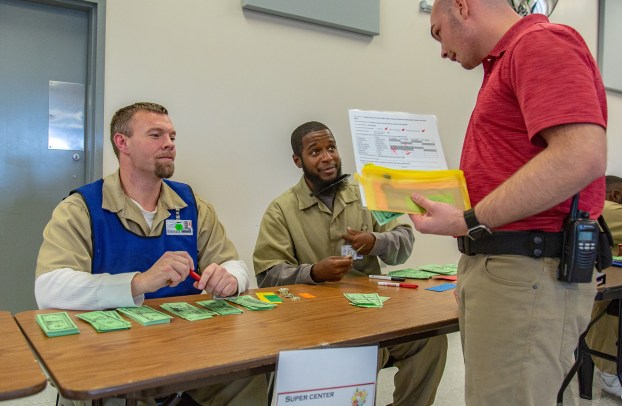 On Tuesday, Howard Hunt was elected Boyle County’s next judge-executive. On Thursday afternoon, he was unemployed, living at home with his parents, and trying to figure out how to make ends meet after spending four years in federal prison for internet fraud.

Hunt wasn’t really in dire straits; he was stepping into the shoes of “Nadine,” a fictional former inmate, as part of a “reentry simulator” program at Northpoint Training Center.

Dozens of community leaders, first responders, correctional officers and students from Campbellsville University participated in the simulator, which gave them a glimpse into how complicated life can be for former inmates after serving their sentences and being released. 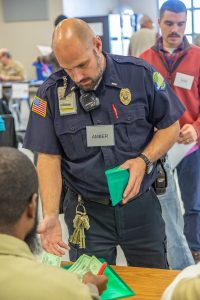 “It’s been very difficult,” Hunt said of his experience in the simulation, “because I failed a urinalysis drug test. Having to pay for transportation to get all my tests done costs money I didn’t expect to have to pay.”

Current inmates at Northpoint acted as the bank tellers, government officials, drug-screeners, pawn-shop owners and DMV employees that participants had to visit during the simulation.

“I think it’s good for the community to know, to experience, at least touch on, what we have to experience when we are released,” Northpoint inmate Michael Reynolds said.

“Maybe they will sympathize with our situation,” inmate Blake Watts said.

It’s good for the inmates to participate as well, Watts added. “It just shows us exactly what we’re going to have to go through (so we can) mentally prepare.”

Every participant was given a name and a scant pile of resources, such as $20 and some jewelry that might bring a few bucks at a pawn shop. They also received a handful of “transportation tokens,” which were used to emphasize the difficulty newly released people can have in getting around. Each token cost $1, and participants had to spend a token just to visit the transportation center and buy more tokens.

Donating plasma could land you $25 if you’re lucky, but you’ll have to take the check to the bank — another transportation token down the drain. Visit the wrong place in search of something you need? That’s another token lost.

Participants scampered around the room trying to successfully show up for their parole appointments, pass drug tests, take job training, pay child support and rent, and scrounge up enough money for food — all before time was called and a round of the simulation was over. If you didn’t complete all the necessary tasks on your card, you were likely heading right back to jail.

“The point of doing this is it’s an eye-opening experience for our staff,” said Brad Adams, Northpoint’s warden. This is the second simulator event hosted at Northpoint since Adams, a Danville native, took over Aug. 1. “The reason I wanted to include our community is because I want our community to see that when a felon is released … they’re seen differently than you or I.”

Adams was himself a participant in reentry simulators prior to the ones hosted at Northpoint. 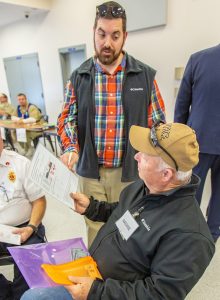 Ben Kleppinger/ben.kleppinger@amnews.com
Matthew Aaron with the Division of Reentry Services, standing, checks on how well Gen. Howard Hunt, seated at right, did on his tasks during a week of the simulation. Hunt failed a test, but Aaron decided to give him diversion and not send him to jail.

Matthew Aaron, corrections program administrator with the state Department of Correction’s Division of Reentry Services, said Kentucky has been doing reentry simulators in its state facilities for probably a little more than a year. Feedback has been great and there are high hopes for what the events could accomplish.

“We’re trying to get a culture change,” Aaron said. “A lot of (corrections) staff … need to realize how much the inmates have to jump through on release. The more we understand what our clients go through, the better we can help them prepare.”

Aaron said he calls the people in and involved with Kentucky’s detention facilities “clients” or “justice-involved individuals” on purpose — “we’re trying to remove as much stigma as possible.”

The simulators are not the only thing being done to address reentry. Aaron said his division is working to host reentry expos — one has already been held at Northpoint — that bring in representatives from employers, rehabilitation centers and community agencies to help provide inmates with the information and connections they’ll need on the outside.

The state is also hiring permanent “reentry coordinators” who will work with inmates and those recently released to find work, drug treatment, financial assistance and more.

Christian Toelke will be one of the first permanent reentry coordinators when she officially takes the title on Nov. 15, Warden Adams said. Toelke works at Northpoint and helped organize Thursday’s reentry simulator.

Toelke said in an email the simulator shows participants how much poverty can affect those released.

“In 2017, poverty affected 18.5 percent of Kentucky’s population,” she wrote. “Poverty is often depicted as a single, cut-and-dry issue. Many individuals entering into society following a period of incarceration will experience some degree of poverty.”

Northpoint inmate William Timms said participating in the simulator led him to an idea.

“I think what would help us out a lot … is if society would pull together and put together a reference book” with information on where to find assistance, churches that could help, organizations’ phone numbers — vital information about all the community resources available that newly released people could take advantage of. The reference book could be distributed to inmates prior to their release.

“A lot of us getting out — if we don’t have nobody, then we return to our same ways,” Timms said.

After Thursday’s participants had completed a “month” in the simulator (four rounds, each round representing one week of time), they debriefed about their experiences. Several said it seemed truly awful what they had to go through.

Hunt said the simulator was “a great learning experience.”

“This is something that a lot of people should experience. It’s an eye-opener to how tough it is for somebody trying to be reinstated,” he said. “… We don’t think about that. This has made me think about it.”

Ben Kleppinger/ben.kleppinger@amnews.com Northpoint inmate Rico Weekly hands over a small amount of cash for a participant’s valuables as he operates the simulation’s pawn shop station.

Ben Kleppinger/ben.kleppinger@amnews.com Matthew Aaron with the Division of Reentry Services, standing, checks on how well Gen. Howard Hunt, seated at right, did on his tasks during a week of the simulation. Hunt failed a test, but Aaron decided to give him diversion and not send him to jail.

Ben Kleppinger/ben.kleppinger@amnews.com Northpoint Reentry Coordinator Christian Toelke talks with a participant about whether he accomplished all his tasks during a week of the simulation.

Ben Kleppinger/ben.kleppinger@amnews.com Northpoint Reentry Coordinator Christian Toelke talks with a participant about whether he accomplished all his tasks during a week of the simulation.

Ben Kleppinger/ben.kleppinger@amnews.com Danville City Manager Ron Scott, right, attempts to get some food from Northpoint inmates Troy Hunt, far left, and Harold Root, who were running the food bank and homeless shelter station.
You Might Like