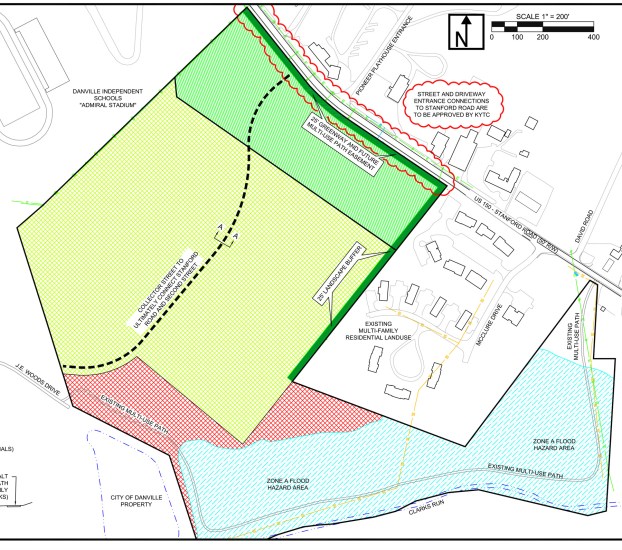 Danville-Boyle County Planning and Zoning A conceptual plan shows the proposed rezoning for a 55.6-acre tract of land along Stanford Road. Land along Stanford Road would remain zoned highway commercial (bright green), while the rest would be zoned neighborhood center residential and commercial (light green and red). A flood plain on the property is represented in light blue.

The approximately 55.6-acre tract of land, formerly owned by the Kentucky School for the Deaf, could feature commercial businesses along Stanford Road, with a mix of other commercial and residential buildings behind, along a new road that would come off of Stanford Road to the west. The owner of the property, Michael McAfee could relocate his business, McAfee Mowing and Landscaping, to the back edge of the property, near a flood plain, according to a preliminary concept shown to P&Z commissioners. 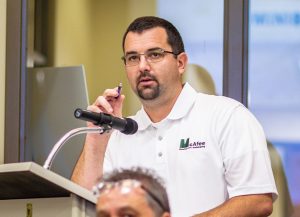 Ben Kleppinger/ben.kleppinger@amnews.com
Michael McAfee speaks about his plans to develop a property along Stanford Road during Wednesday morning’s meeting of the Danville-Boyle County Planning and Zoning Commission.

The development would also create the possibility of a connection between Stanford Road and South Second Street via J.E. Woods Drive.

McAfee successfully applied for an amendment to the P&Z future land-use map (FLUM) back in June as a precursor to a zone-change. On Wednesday, the P&Z Commission voted in favor of rezoning most of the property to “NCR-C” — “neighborhood center residential and commercial.” The property currently sits in multiple zones, including agriculture, highway commercial and industrial business.

If Danville City Commission finalizes the zone change, a strip of the property along Stanford Road would remain highway commercial; the rest of the property — except for the flood plain, which essentially can’t be used for development — would become NCR-C.

McAfee said in June he sees “a lot of potential” for the property and the stretch of Stanford Road north of Gose Pike.

P&Z Director Steve Hunter said how the land develops will be determined by what businesses express interest in locating there. At this point, the proposed zoning leaves things “flexible” so that if there winds up being more interest in commercial development or in residential development — such as apartments or even an assisted living home — it will be OK either way.

McAfee agreed to seven conditions on the zone change, including a cap on the total square feet that can be developed (600,000), creating a 25-foot landscaping buffer on the south side of the property next to an existing residential development; putting all buildings on city sewer; promising to provide “trip reports” and a traffic study as the area develops; and creating a 25-foot “greenway” area along Stanford Road that can be include a “multi-use path.”

McAfee also agreed to a requirement that all buildings on the land would be constructed of high-quality materials — something Hunter called “very, very impressive.” All buildings facing Stanford Road would have exteriors constructed of 100-percent “brick, stone, masonry or dryvit material,” according to the condition of zone change. Buildings adjacent to those would have to use at least 75 percent of those materials; all other buildings further in to the development would have to use at least 50 percent. 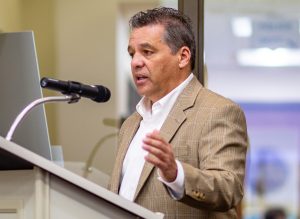 “I think it will look attractive,” Hunter said, noting that many other properties along Stanford road are grandfathered in and don’t meet modern landscaping regulations.

No one spoke specifically against the proposal during Wednesday’s public hearing. Robby Henson with Pioneer Playhouse, located directly across Stanford Road from the proposed development, said he is “on the fence” about it.

The outdoor theater is “probably the business and property most affected by this development,” Henson said.

Henson said there had been trees along Stanford Road on that property, but the trees have since been cut down and “what we have now is a dirt pit.”

“I just want this to look nice and not have shortcuts taken,” he said.

McAfee said work will be done to fill in and level off the land along Stanford Road, and the fill will be high-quality, because it has to be in order to attract commercial development.

The proposed road through the development would end near the end of J.E. Woods Drive, making it possible that a future project could be completing a connection between those two roads and creating a more direct route from the Stanford Road area to the southern side of downtown Danville. Hunter said the land in the middle is owned partially by the City of Danville and partially by KSD. “It would have to be a partnership — the city, the applicant (McAfee) and KSD.”

Democrat Trille Bottom retained her post as Boyle County Clerk in Tuesday’s election by winning all 26 precincts and... read more