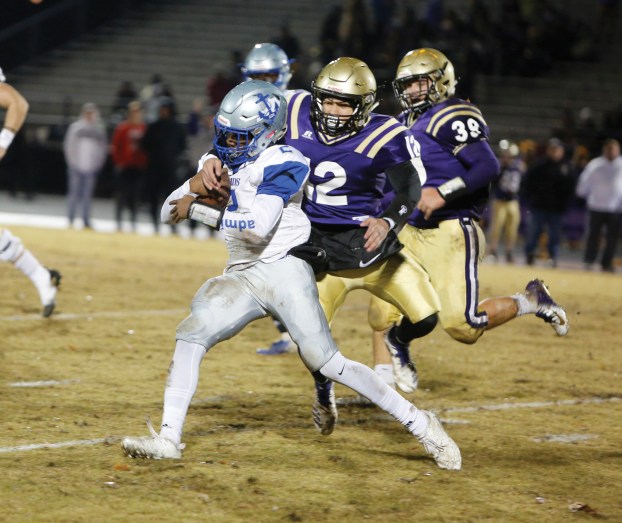 Photo by Mike Marsee/Danville running back Brennan McGuire (2) is brought down by Somerset defensive back Tate Madden (12) on a first-quarter carry Friday.

SOMERSET – There wasn’t a single knockout punch among the series of blows that ended Danville’s season, but the cumulative effect of them proved to be too much for the Admirals to withstand.

The Admirals were reeling in the early going Friday night after they turned the ball over four times in the first five minutes, and they never overcame that as they fell to Somerset 27-14 victory in the second round of the Class 2A playoffs at Clark Field.

Somerset turned two of Danville’s early turnovers into scores, and that was essentially the margin of victory.

“We spotted them 14 and got beat by 13,” Danville coach Clay Clevenger said. “The ball just didn’t bounce our way all night, really, but that first five minutes, I’ve never been a part of anything like it.”

It led to Danville’s second loss of the season to Somerset, this one ending a season in which the Admirals (5-7) posted their first losing record since 2009. And Clevenger said the events of the first few minutes Friday were in a way emblematic of an up-and-down season that he said was taking a turn for the better in the recent weeks of practices and games.

“I felt like we really were just kind of coming into our own, through some injuries and some bad breaks,” he said. “It just seemed like the ball didn’t bounce our way quite a few times this year. It happens sometimes. Nothing’s guaranteed in the game of football just like nothing’s guaranteed in life.”

This marked the second straight season that these two longtime rivals met in the second round of the playoffs. Danville eliminated Somerset last year with a 19-0 win that completed a season sweep, and the Briar Jumpers (10-2) returned the favor this year after winning the teams’ regular-season meeting 21-10.

Somerset has now won eight of 14 games between the teams since annual meetings resumed in 2009 in this 109-year-old series, which Danville leads 49-21-2.

The Admirals kept battling even after falling behind.

The Danville coach said the early fumbles might have been due in part to jitters, a wet field or both.

“It was a big game,” Clevenger said. “It was just nerves, and it was a little bit sloppy and wet and we just had to get adjusted to it.

In all, there were five Danville fumbles in the first 4:50, four of which were recovered by Somerset.

The first came on the opening kickoff, when Chaz Gilmore pounced on the ball at the Danville 34-yard line. On the Jumpers’ first play from scrimmage, Kaiya Sheron threw long to Kade Grundy for a 39-yard scoring play just 14 seconds into the game.

The Admirals fumbled on consecutive plays on their next series, and Peyton Hatcher recovered the second for Somerset at the Danville 39, but the Jumpers went three-and-out.

Zach Thornton completed a pass to Darrian Bell for 19 yards to move Danville into Somerset territory on its next series, but a fumble at the end of the play was recovered by the Jumpers’ Ricky Gilmore at the Somerset 37.

The Admirals forced another three-and-out, but the Somerset punt glanced off a Danville player and Chaz Gilmore got his second recovery of the night. On the next play, Sheron scored on a 29-yard run to put Somerset up 14-0 with 5:22 remaining in the first quarter.

That proved to be too great a hill to climb for Danville against a Somerset team that entered the game ranked sixth in the state in scoring defense, having allowed only 88 points in its first 11 games.

The Admirals managed 206 yards against a defense that was allowing only 123 yards per game, but they were held to two touchdowns or less for the sixth time in 12 games.

The first of those came as an answer to Somerset’s second score, as Danville drove 60 yards in seven plays and scored on a 5-yard run by Kishown Bartleson, who had both of the Admirals’ touchdowns.

The Admirals advanced into Somerset territory twice in the second quarter but were stopped. Between those series, they were backed up to their own 2-yard line, after which Somerset took advantage of a short field to take a 20-7 lead on a 1-yard run by Alex Miller that capped a 5-play, 34-yard drive.

Danville used two big plays to score for the final time this season on its first series of the second half. Thornton hooked up with Bell on a 33-yard pass play, and Bartleson scored two plays later on a 41-yard run.

The Admirals never made it across midfield again, however.

Somerset scored with 3:24 left on Sheron’s 9-yard pitch pass to Cam Austin to restore its two-touchdown lead, and Treavor Brock intercepted Thornton to end Danville’s next series and effectively end its season.

Bartleson led Danville with 62 rushing yards on eight attempts. Thornton completed six of 17 passes for 72 yards, and he also rushed for 55 yards.

The Admirals held the Briar Jumpers to 246 yards.

“I thought our defense played well,” Clevenger said. “I thought it was a good, clean hard-hitting football game for both teams. It was a slugfest. It was a game that you’d expect Danville and Somerset to play in the playoffs.”

Sheron was 8-for-13 for 141 yards for Somerset, which will host Lexington Christian in a regional final next week.

Admirals up the tempo in playoffs

By JOE MATHIS Contributing Writer Coming into the playoffs with a 4-6 record and the No. 3 district seed isn’t... read more