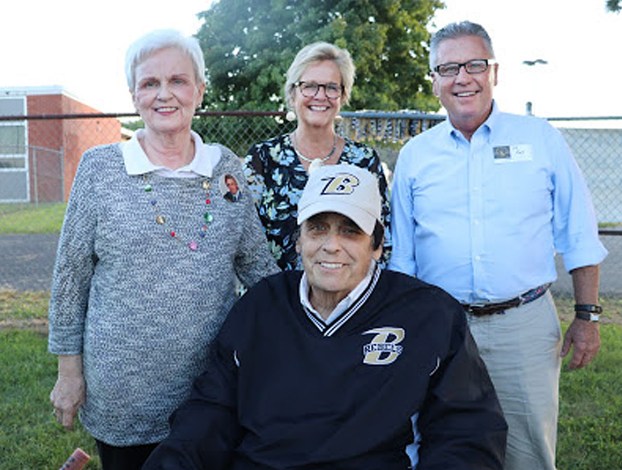 Rebels for Life are staff members who have retired and given back to the school and or community. The Boyle County High School Alumni Association chooses the recipients based on their dedication to Boyle County. Many factors are considered, including additional work for the county, community involvement, donations, volunteerism, mentoring, attendance at events and other ways that show their support.

Denise is a volunteer at Ephraim McDowell Medical Center; a member of Danville Presbyterian Church and served as a mentor there. Her hobbies include gardening, reading and attending sporting events that her grandsons are involved in.

Denise is married to Ed Rall and has two children, Daniel of Versailles and Lindsay of Lexington; and two grandsons, Eli and Jackson of Versailles.

• Ed Rall was a teacher, football and baseball coach at Boyle County High School. He taught English at middle school and high school from 1971-1988.

Ed is a member, Sunday School teacher and Elder of the First Presbyterian Church of Danville. Being retired, Ed has many hobbies: gardening, reading and fishing are a few. Ed is the husband of Denise Rall and father to Daniel and Lindsay and grandfather to two grandsons, Eli and Jackson. Ed and Denise reside in Danville.

• Dennis Preston was the head band director for the Boyle County Marching Band from 1976 to 1996. During this time, he grew a band from 35 members to over 140 members in his 20-year run. The high school had less than 800 students during this growth. From 1984 to 1994, the Boyle County band was the largest AA Band in Kentucky. The band competed in nine states and consistently won Best in Class, Grand Champion or received a Superior rating. From 1976 to 1995, the Boyle County Band received over 108 Superior Ratings in 33 counties of Kentucky. In this span of competition, the band won over 40 first-place trophies and won over 15 sweepstakes trophies, both in Kentucky and out of state. The band won Best of Class at the St. Louis Missouri Six Flags Contest and at the Atlanta Georgia Six Flags contest. The band also competed in the Marching Bands of America, a national contest, and won many awards, including 13 superior ratings at every MBA competition. The estimated total of trophies during Preston’s reign at BHCS for Best Percussion, Best Flags, Best Music, Best General Effect and Field Commander is well over 250 trophies.

Preston and the band also attended the football games to support the team. Regardless if there was a competition the next day, the band always provided a first-class halftime show. The band also participated in home basketball games, providing a fun pep band for the crowd.

Preston was awarded Outstanding Young Man of America by the Jaycees, a national honor, as well as a Kentucky Colonel by Gov. Paul Patton. Preston was born and raised in Harrodsburg. He attended Harrodsburg High School and Eastern Kentucky University where he was a member of the marching band, concert band, and pep band. He could play any instrument you handed him.

Preston has been married to his wife and college sweetheart Delores for 47 years. They have two children, Denise (Ian) Young and Devin Preston. Preston also has two grandchildren, Landry and Knox Young. Preston retired from the Boyle County School system in 2004, after many years of teaching general music and beginner band to students at Junction City Elementary School. Since retirement, he has enjoyed the role of an “Elvis” impersonator performing for private parties and nursing homes.

Preston was loved by many during his time at Boyle County as band director, as he taught his students respect, to work as a group or team, and while in uniform, students were taught they were representing their school.

November is for voting, being thankful, giving back