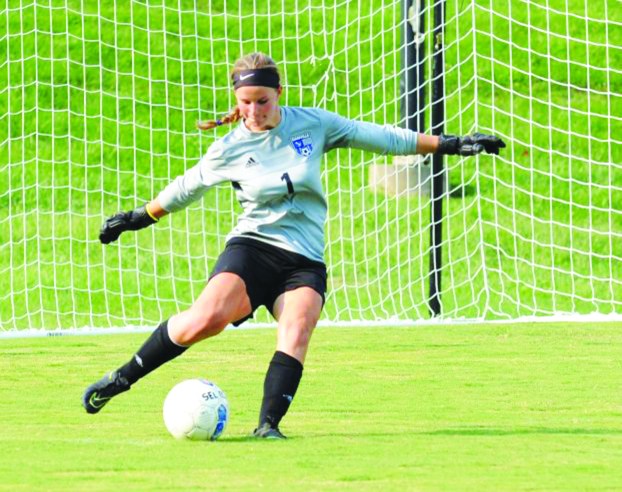 Matt Overing/movering@amnews.com Danville senior Grace Gaffney set records for shutouts in a season (11) and for a career (33) in her four years as a starting goalkeeper for the Admirals.

Two goalkeepers were named on every possible All-Area ballot.

Both play for Danville.

Grace Gaffney and Keeton Burnside were critical between the sticks for Danville’s girls and boys soccer teams, respectively, and earned their spots as goalkeepers of the year.

Burnside said he grew four inches between his sophomore and junior seasons. Already known as a very technical goalkeeper, he took another positive step in his development as an upperclassman.

“He’s one that the kids look up to because he does the right thing all the time. He’s respected,” boys soccer head coach Brent Beauman said. “He’s one of the most technical goalies I’ve ever coached. His reactions are good, he makes real good decisions reading the game and he’s a good field player as well. It’s always good to not have to worry about a pass back to the keeper.” 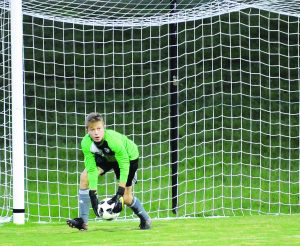 Matt Overing/movering@amnews.com Danville junior Keeton Burnside was listed on every possible All-Area ballot for his performances in goal for the Admirals. Burnside had four shutouts in a 19-2-1 season for Danville.

Burnside allowed 18 goals in 18 games and had four shutouts this season. Danville’s attacking style of play allowed for opposing teams to have chances, but Burnside was a safety net as the last line of defense for the Admirals in a 19-2-1 season.

“A lot of that has to do with our chemistry on the field as a team,” Burnside said. “We all knew what each other were capable of and we pushed each other every day at practice. With the intensity that we had at practice, the way we played in games, how we prepared, that played a major role in that.”

Beauman said that ever since Burnside joined the Admirals’ program, he’s been a leader.

“Keeton, he came over from DCA and just immediately, I remember his first game at Centre camp, he was yelling at the older guys from his goalkeeper position,” Beauman said. “They were just like, ‘who is this guy? We like him.’ His confidence shows all the time, and that’s what you have to have as a goalie. You can’t second guess.”

It’s that dedication and confidence that was seen throughout the team, Burnside said.

“We didn’t take any team lightly, we went into every game looking to make it the best game possible,” he said. “We knew it’d be a tough district and definitely a tough region. Coach prepared us well for that. We took every measure possible: We worked on our fitness, our in-game fitness, techniques.”

It’s rare to have such a quality goalkeeper, and Beauman’s had many in his time at Danville. Burnside has made his name among them, the coach said.

“His effort and his skill fill up the goal two times, three times, four times more than his size does,” Beauman said. “We’ve had a long stretch of really good goalies. It’s something we’ve always relied on. It’s an awful position, you get all of the blame and not a lot of glory. You’re putting your face where most people won’t put their feet. But you have to have it.”

Grace Gaffney is the leader at Danville High School in shutouts.

For the past four years, she’s been a leader in all areas for the Admirals.

Gaffney has the record at Danville with 11 shutouts in a season and 33 for her career.

“What made Grace so special, it was about the team,” girls soccer head coach JD Smith said. “She’s won a lot of awards over her career but she wouldn’t make it about herself. When you talk to her about shutouts and stats, she’s the first one to talk about her defense. For high school kids, it’s refreshing from a coaching standpoint that you have a kid that cares about the group that much.”

Gaffney has been named to an All-State team for the past four years. As a junior and senior, she’s been Second Team All State.

But that’s not what she was going for as a senior.

“It’s just like a new sense of responsibility because it’s suddenly your team,” Gaffney said. “As a goalkeeper I’ve had the responsibility of telling people what to do on the field. Senior year, I’m in charge of a lot of things and you just want to make the best out of everything. I really wanted to build from my junior year, that was probably the best year for me just with all the talent we ahd. The seniors last year had a really good work ethic and I just wanted to continue that this year and improve on those results.”

“It was nerve wracking but also exciting because I was taking her place,” Gaffney said. “She was someone I looked up to a lot. I had big shoes to fill but I wanted to show them that I could do it.”

She filled those shoes and then some, and Smith said it was noticeable from the first time she stepped on the field for Danville as a middle schooler.

“Her drive. From the first time she stepped on the field in middle school, you could tell that she was driven, she was going to do whatever it took to help the team,” he said. “She likes to win. She’s a competitor. I think that was one of the biggest things that helps her, that drive and competitive spirit. If we let in a couple goals and got a win, that wasn’t good enough for her.”

Gaffney got into goalkeeping at an early age, and it was for a unique reason.

“When I was little playing soccer, I didn’t like running,” Gaffney said. “That’s when I got into goalkeeping stuff. Then on 8th grade night, coach Smith put me up top with Abbie Hibbs and we played against Boyle. I’ve always tried to play the field one time, then for senior night, we wanted to do the same thing. But I’ve always been goalie. It’s a lot of pressure but I wouldn’t want to be anything else.”

Gaffney has lobbied to coach Smith to let her play the field in high school, but the coach needs just one example to cut her argument down.

“We had a JV game, she had (club soccer) practice so she was a late arrival,” Smith recalled. “She wanted to play so I put her in, and not 20 seconds later she’s down injured on the ground for colliding with the opposing goalkeeper.”

Smith did acknowledge that she could play the field — and if Danville had to take penalty kicks this year, she would’ve been one to do so.

Gaffney’s high school career ended abruptly with an ACL tear in the first round of the 12th Region tournament. She was on her way to another shutout — Danville finished the game without allowing a goal — but the Admirals had to do without their All-State goalie in the next round.

Gaffney will sign with Morehead State this Saturday to play soccer, and she said as of now there’s no talks of redshirting.

“I’m working on the recovery process and I’m just going to hopefully be ready to go by July of next year,” Gaffney said.

Coach Smith said there’s no question that an injury won’t hold Gaffney back.

“A kid like Grace, you can’t keep her down,” he said. “Her dad shared something less than a week after, she was already back in the weight room. I have no doubt in my mind that she’ll do everything she needs and then some to get back healthy and when she gets to Morehead she’ll do what she needs to do there. That’s not even a question.

“She’s a special kid. I’ll look back at my coaching career and getting to coach her will be one of the highlights.”

Centre women’s soccer is moving on to the Sweet 16 for the third time in program history. The Colonels defeated... read more