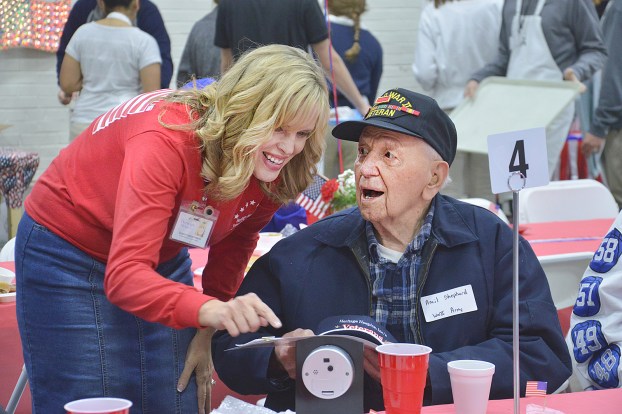 Generations of veterans from different eras and wars gathered together during Heritage Hospice’s 11th annual Veterans Appreciation Day luncheon held on Monday at the National Guard Armory in Danville.

The free event brought in hundreds of veterans from all branches of the military who live in Boyle, Garrard, Lincoln and Mercer counties. 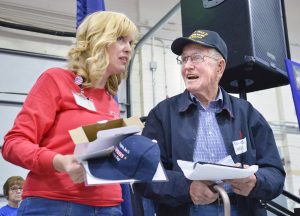 Robin Hart/robin.Hart@amnews.com
U.S. Army World War II veteran Paul Chandler, who just turned 100, is recognized as being the second-oldest veteran at the Heritage Hospice Veterans Day lunch by Sharon Martin, who coordinated the event. He is just three months younger than the oldest veteran, Ancil Shepherd, who was also honored.

An air of comradery filled the room as old friends shook hands and hugged. They talked about their lives, families, and days of serving their country.

Some new friendships and acquaintances also developed across tables. Many veterans wore caps, vests and jackets designating what branch of service they were associated with. Some just wore their name tag with “Army,” “Navy,” “Marine Corps” or “Air Force” hand written on it. They all seemed proud of their service.

Vietnam vets sat across from Desert Storm veterans. World War II veterans mingled with high-school students from Danville Christian Academy who asked questions about their service while serving their meals.

Folks who didn’t know each other seemed to instantly form a bond when they found out they once served in the same military branch, whether it was during war or peace times.

A few of the red, white and blue decorated tables were reserved just for World War II veterans — the oldest group of men at the luncheon. There were at least 32 WWII veterans who attended and were honored this year, said Sharon Martin with Heritage Hospice, which organized the luncheon. Each were given a gift card, a special hat, an American Flag pin and a poem written by Ret. Gen. Howard Hunt, who is Boyle County’s judge-executive-elect.

This year, Ancil Shepherd was recognized as being the oldest veteran in attendance at 100 years old. Second oldest, who is also 100, is Paul Chandler, being just three months younger than Shepherd.

The youngest honoree who is just starting his military service was Elijah Jenkins from Lancaster.

The 11th annual Heritage Hospice Veterans Day luncheon was held last year at the National Guard Armory in Danville, where it’s once again being hosted.

Robin Hart/robin.Hart@amnews.com Charles R. Barnes, left, and his twin brother, Donnie Barnes, right looks over the Veterans Day program with Kenny Johnson, center, who is an Army veteran, at the annual lunch honoring all area veterans . The Barnes brothers served in the U.S. Army during Desert Storm.

Photo by Robin Hart/robin.hart@amnews.com Bernard Alsip,of Perryville, talks with a fellow veteran during the annual Veterans Day lunch at the National Guard Armory on Monday. Alsip retired as Chief Warrant Officer 4 after a 30-year career with the U.S. Army.

Photo by Robin Hart/robin.hart@amnews.com Martha Whiles, of Stanford, poses for a photo with Norman Walker of Danville during the annual Heritage Hospice Veterans Day lunch on Monday. Whiles is a volunteer for the annual event to honor veterans. Walker joined the Navy at age 17 in 1942.
You Might Like