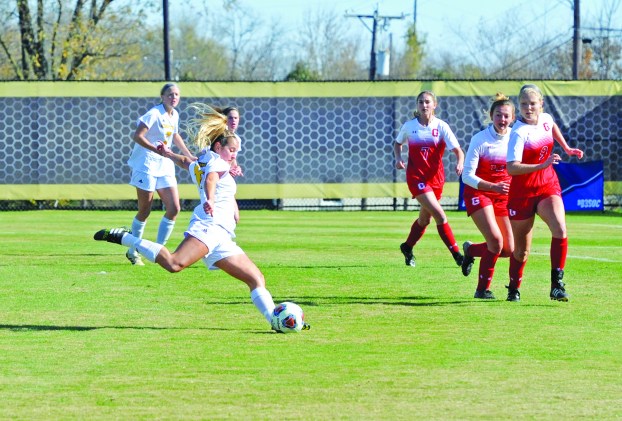 Matt Overing/movering@amnews.com Centre College midfielder Meghan Paynter rips a shot at the Grove City goal during the first half of Sunday's contest. Paynter, a Boyle County High School graduate, had two shots on goal in the first half of Centre's 1-0 victory in the second round of the NCAA tournament.

Centre women’s soccer is moving on to the Sweet 16 for the third time in program history.

The Colonels defeated Grove City 1-0 on Sunday in the second round of the NCAA tournament to advance to the Sweet 16, where they’ll face No. 15 Wheaton in St. Louis.

“It’s always neat to put yourself in the Round of 32 and then into the Sweet 16,” head coach Jay Hoffman said. “We’ve done it twice, this makes it the third time. It’s just an honor.”

Sunday’s contest at Amend Field had the makings of a blowout early: Boyle County graduate Meghan Paynter had a pair of shots on goal in the first half, and the Colonels had nine first-half shots in total compared to Grove City’s two.

But, like Grove City’s first-round game against No. 22 Chicago, the Wolverines’ defense held strong against a barrage of shots on goal. Grove City beat Chicago 2-1 despite being out-shot 29-6.

“All of us had watched the Chicago and Grove City game,” Paynter said. “We knew they had a lot of heart coming in because they had just beaten the No. 22 team in the country. We just came into it knowing that we had the ability to win, but we’ll have to go out and give it our all because this team is coming off a game that they probably shouldn’t have won, but they did.”

Grove City had an upset on its mind, but Elizabeth Nelson squashed any talk of an upset with a goal in the 73rd minute to put Centre ahead. Teammate Kristin Dean found space in the right attacking third, played Nelson into the box and Nelson powered a shot into the near post top corner.

“I got the ball, I was dribbling up and I had taken a few shots already. But their keeper was good with shots from distance, so right before I would’ve shot, I decided to shoveled it off to (Nelson),” Dean said. She was right there and able to put it right in. As soon as it went in, it was just a weight off of our shoulders, we were able to relax after that and know we had control from there on out.”

Hoffman said that Nelson, a freshman, strikes the ball as well as anyone on the team.

“It’s been a long time since we’ve seen a person strike a ball that consistently on frame,” Hoffman said. “She had an amazing game-winner against Denison, and she hasn’t really stopped. She can just strike a ball. When that left her foot and I saw it going near post 90, I was like, ‘that’s going in.’ If there’s anybody on this team that could strike a ball like that, everyone would say Elizabeth.”

Nelson joins a team that has been a mainstay in the NCAA tournament, although making it past the first weekend hasn’t been easy for the Colonels. Centre was ousted in the first round last year.

“I think last year we got a tough draw and we kind of ended too soon. That was pretty tough,” said Paynter, a junior. “I think this year that really pushed us because we want to make it back to the Final Four, make it to the finals. We want to be the team that goes as far as we ever have. I think that’s really what is pushing us.” 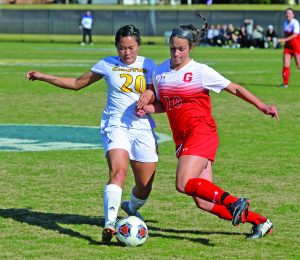 Photo by Matt Overing
Centre defender Gracie Fitzgerald battles for possession with Grove City’s Krista Heckman during the first half of Sunday’s NCAA second round game at Amend Field.

The undefeated Colonels will be a favorite as the fourth-ranked team entering this weekend’s Sweet 16 action. There’s pressure that comes with those stats, but Paynter knows her team is up for it.

“I think absolutely we feel pressure, that kind of showed (Sunday),” she said. “We didn’t come out like we needed to on a team that we should’ve been killing. We let them go however many minutes and we didn’t have a goal. I think we feel pressure but at the same time, we know how good we can be, we just need to remember that when we’re playing.”

Dean added that her team’s history of success keeps her nerves in check.

“We’ve always managed to find a way every game,” she said. “That always comforts me when I feel anxious or nervous before a game, with every other game, it’s just another game. Find a way, any way we know how.”

Hoffman said their second-round game was a challenge because of the way Grove City played.

By halftime, Hoffman wasn’t happy with the way his team was playing in the midfield. He wanted to see a more patient attack.

“I was frustrated with the midfield, I was frustrated with our technical ability to put together passes,” the coach said. “As a result, it was a lot of transition play. We talked about cleaning that up and talked about doing more isolation instead of just settling for easy crosses into the keepers’ hands. We wanted to get more in-line attack and put the ball away from the keeper.”

A more direct approach is exactly how Nelson scored and it’s the reason why Centre has advanced to the next round.

And, when the Colonels visit St. Louis for the Sweet 16, they know they’ll have an even bigger test.

“We’re going to play another top 15, top 10 team,” Hoffman said. “If you win that, you’ll face another top team in the country. I think we’re going to have to be very sharp with our tactics this week. Players are going to have to understand when to step when they need to, low pressure when we need to, how to get pressure and where we want to retake the ball, those types of things. Wheaton is going to be very, very good. They move the ball well, they’re used to winning, they’ve had a harder strength of schedule than we’ve had. When you compound that, it’s going to come down to us executing.”

STANFORD — It has been three years since Lincoln County’s last playoff victory. The Patriots are hoping that changes Friday... read more