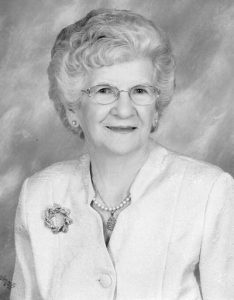 Frances was preceded in death by her husband, W.P. Ruble. She took great pleasure in serving Garrard County third graders as her role of teacher for many years. After retirement, she contributed to the community through various board and charitable endeavors. Her heart was always in the United Methodist Church, being a lifelong leader of Bryantsville United Methodist and in her later years an active member of the Lancaster United Methodist congregation.

Funeral services will be held on Wednesday, November 14, 2018, Spurlin Funeral Home Chapel beginning at 11 a.m. Reverend Bill Arnold and David Terry will officiate, followed by burial in Lancaster Cemetery. Visitation is Tuesday, November 13, 2018 from 6 – 8 p.m. at the funeral home.