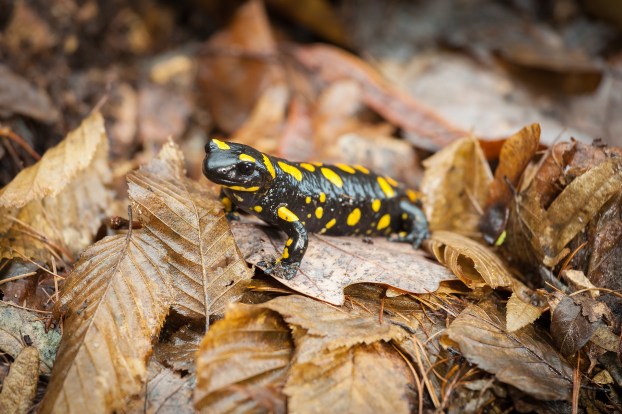 Amanda’s Animal Fact of the Week Like a frog, salamanders go through metamorphosis, starting as an egg and then going through larval stages before becoming an adult.

Help out animals by leaving your leaves alone

The leaves are falling all around and while the temperature might make it feel like winter is here, we are still going to have fall for a little while longer. Some of the leaves are still hanging on the trees and they will all be coming down soon.

I know a lot of people like to get out their leaf blowers, rakes and bags to start cleaning up this “mess.” However, if we think about this for a minute, it doesn’t make much sense. Our idea of a “mess” is really mother nature’s idea of protecting plants and animals. There is usually a reason for why the natural world is the way it is and does what it does. We are not always able to see it and it doesn’t always line up with the way we think it should be, but there is a purpose.

I recently found out that some bat species will hibernate under fallen leaves, which is sometimes called leaf litter. I was already against raking my leaves because of all of the other reasons I’ll mention in a moment. But the fact that my leaves could be a home to bats in the winter and help keep them warm is exciting to me.

It might not necessarily happen in my yard, but it would be really cool if I could help a bat. And the potential for helping a bat is a far better prospect to me than the alternative. Because if I’m not going to leave my leaves on the ground, what am I going to do with them? Use a single-use plastic bag to throw them into a landfill where they won’t be able to biodegrade properly because they are wrapped in plastic.

I would much rather leave my leaves on the ground so they can protect not only bats but other animals this winter and then be broken down into new soil.

It’s only natural for trees to drop their leaves in the fall. The most natural thing we can do with those leaves is leave them in place, allowing the natural creation of a leaf layer. According to the National Wildlife Federation, it’s perfectly natural to have a leaf layer that is several inches deep. When you have these leaves on the ground, it actually creates a micro-ecosystem that is very beneficial to many kinds of animals, including box turtles, butterflies, moths, chipmunks, salamanders, earthworms and other animals.

If you really must give your yard one final mow and you really want to break up some of the leaves, the best thing you can do is to mow without your bagging attachment and don’t cut it too short. This way you are still breaking up some of those leaves and spreading them around the yard. You aren’t keeping the leaf layer intact, which would be optimal, but it’s a far better solution than raking them up and throwing them away or blowing them around. Another option is to rake them up under bushes so you still have some leaf layer in your yard, even if your whole yard isn’t covered. These leaves will break down and serve as a natural mulch.

By AMANDA WHEELER Going Green in the Bluegrass Halloween is one of my favorite holidays and to celebrate, so I’ve... read more