Question: Jerry, my Aunt Helen gave me this family heirloom a few weeks ago. It was owned by my great grandmother, Lee Davenport. What can you tell me about it? She was married in the early 1900s and I believe it was likely a wedding present. I have the pitcher and six matching tumblers. It’s in good condition but two of the tumblers have some severe cracks. To me it’s priceless, but does it have any value? Thanks for taking the time to look at this. 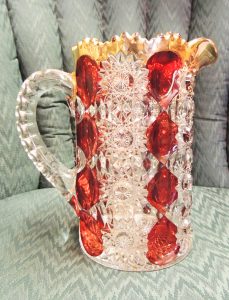 Answer: What a stunning pitcher. It’s an iced tea or lemonade pitcher with matching tumblers. I suspect that you’re right — that it was likely a wedding present. Sets made for lemonade, iced tea, water, hot chocolate and even punch were very popular wedding and anniversary gifts. They would have been displayed with great pride on one’s sideboard, dining room table or display cabinet.

The Edwardian era was swimming in tableware, as dining was used as standard for one’s position in society. Even the burgeoning middle class clamored for the attempt to better themselves and their social standing. Thereby, jewelry shops and home emporiums groaned with the weight of fine dining accessories.

Your piece is pressed glass. Pressed glass is just that, glass that is forced or pressed into a mold. On the other hand, cut glass was literally cut with diamond wheels to achieve that sparkling detailed design. Though it was less labor intensive and less expensive it’s still a gorgeous set.

I found that your set was made by the Ohio Flint Glass Company and its pattern name is Gloria. It dates to 1907. This was a goodly sized set with many other pieces available. Even with some damage, you have a major plus on your side — its condition is like new. Usually over time the gold trim wore off and the ruby stain dulled. Yours was used very carefully. Good thing, as the gold and the ruby colors are really only microns thick. So don’t ever scrub it hard.

Today’s market has not been too kind to pressed and cut glass. Seen by many as a fussy relic, but still thought of as a work of art by others. Because of their “special occasion” title, they were often kept in display cases, so many examples are still on the marketplace. Also many people are downsizing and a vast majority of Victorian items from the early 1900s are simply not in style today. I think that your beautiful set, in a nice antiques store, would be priced at about $125 for the set, even with some cracks to the tumblers. Thanks for sharing it with us.

Information was incorrect in an article about James Adamson “Addie” Cheek and his wife, Margaret “Maggie” Logan McKee, that appeared... read more