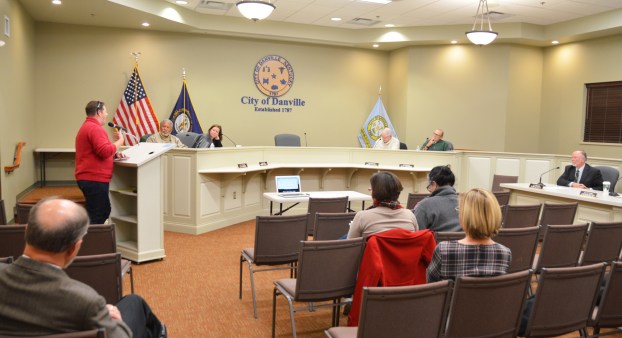 Bobbie Curd/bobbie.curd@amnews.com Heart of Danville Director Nick Wade explains to city commissioners and staff why it's difficult to present a final, completed piece for review in reference to public art. "The funding agency assumes all risks, and if that design is denied, the agency is out that money," he said, in reference to requiring a completed design for approval.

Several members of the community spoke with commissioners and city staff Thursday night during a special meeting held as a “starting point” to create regulations for public art in Danville.

Joni House, historic preservation coordinator, presented combined findings on procedures used in about 25 different communities, across the state and nation, to regulate public art. However, the only common theme she found throughout her research is “there is no common theme.”

As of now, the Architectural Heritage Board reviews and approves installation of art in the historic district, and some policies are set in place. House said perhaps requiring the funding organization to present finalized plans of the art with its initial application to be approved in one fell swoop would be best. 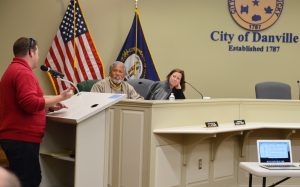 Bobbie Curd/bobbie.curd@amnews.com
Heart of Danville Director Nick Wade, left, explains to Commissioners J.H. Atkins and Denise Terry why it’s difficult to present a final, completed piece for review in reference to public art. “The funding agency assumes all risks, and if that design is denied, the agency is out that money,” he said, in reference to requiring a completed design for approval.

However, many spoke to the difficulty in requiring an artist to create a piece of artwork, which must be paid for up front, when there’s a possibility the request could be denied, then the organization is out that money.

House also said according to AHB guidelines, content is addressed in the way of art versus advertising, and if it is to be considered art, it cannot represent a business, product or service — something she did find universal across communities.

But as far as regulating content, each community handles that uniquely, she said. Some consider anything a sign, therefore it’s regulated by planning and zoning; others have designated public art programs that oversee it, etc.

City Attorney Stephen Dexter said involving the community as much as possible may be a good idea. “Holding a public hearing over each installation could prove beneficial,” he said.

Resident and artist Dana Dixon said going with public opinion could create more of a “web contest” arena — whoever gets the most votes wins. “That doesn’t consider the economic impact it could have on everyone’s property and investment in the historic district. If you have a path where it’s all egghead artists, if there is such a thing, who gets to decide what is art? Which, of course, no one can really codify aesthetic discernment.”

Dixon said perhaps if it’s a two-tier process, where the final decision is made after recommendations of artists and those who have studied art history and “understand the economics and what would be appropriate,” and somehow combine it with consideration of what the public likes and wants.

Most of the emphasis was put on the historic district, which resident Wilma Brown was unhappy about. “There was nothing about the announcement of this meeting that said it was about the historic overlay, it said it was a discussion of art in public places,” Brown said, and assumed since the notice came from the City of Danville, it would include discussions not limited to downtown. “That’s not all of Danville.”

Brown said she’s been calling for a committee sanctioned by the city to oversee public art for seven years. Her vision is a “much larger committee that must consult with the AHB” when art is proposed in the historic district — a diverse entity to review things like “cultural disrespect.” 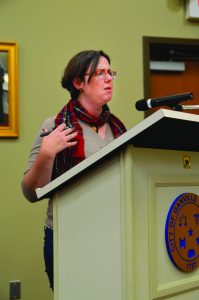 Bobbie Curd/bobbie.curd@amnews.com
Kate Snyder, marketing and development director for the Community Arts Center, cautions city staff about over-thinking the content of public art. She said based on the conversation Thursday night, she felt “the goal for some is to make puiblic art as safe as humanly possible and uncontroversial … Art has a much bigger purpose than just to make everyone happy.”

She said whatever the final guidelines end up being, she wanted everyone to keep in mind “the goal is not to put a process in place to leave everyone feeling happy all of the time; you won’t be able to do it, and that’s not the goal of art.”

Snyder also spoke to the requirement of a final design in place before getting full approval. “Right now, a proposed idea or theme is required, and to switch that to a final and complete design may feel like an easy solution. But bear in mind — from an artistic perspective, and how art is created …” She said from the funding entity’s side, it’s a financial risk to take on; artists don’t work without pay.

“Content will always be subjective. The more bold you’re willing to be and step back from that … If it’s a well-respected artist and in a place we all agree on, maybe it’s OK if we don’t know exactly what it will be,” Snyder said.

Milton Reigelman, a member of Sister Cities, cautioned on over-monitoring artistic content, emphasizing creativity should be somewhat of an organic process. He used a quote from Supreme Court Justice Potter Stewart, from a 1964 case about obscene material.

“They were trying to define pornography,” Reigelman said. “He said, ‘I can’t define it, but I know it when I see it.’ Keep in mind, everybody, that art is not identifiable ahead of time. It really isn’t.”

Planning & Zoning Director Steve Hunter said there were some issues with the present guidelines he struggles with, such as the lack of more measurable items. P&Z is currently working on revising its sign ordinance, he said. But as far as the discussion Thursday, Hunter said, “We’re going too deep into the design and the artistic end … maybe the guidelines need to get away from message and design, and more into bulk, height, size and location … We could get away from regulating or discussing the content.”

Hunter said he also struggled with the size of the murals in the historic district, but “as soon as we step five feet out of the district, someone can’t put up ¼ the size of that … Explain that to the folks out on the bypass who say why can’t I put up a sign like that,” he said, because the murals are installed under “the guise of public art. We need more measurables for uniformity.”

Dexter told the crowd the city welcomes any written proposals or ideas on regulating public art while the discussion is fresh and new. He said akin to a “call for artists,” he encourages anyone in the community to reach out to them and share their thoughts. “This is your call to do that. This is a call to the community — what do you want regulated in the downtown district or beyond? Now’s the time to do that.”

Perryville Elementary School has been named a National ESEA Distinguished School, making it one of only 100 in the nation... read more