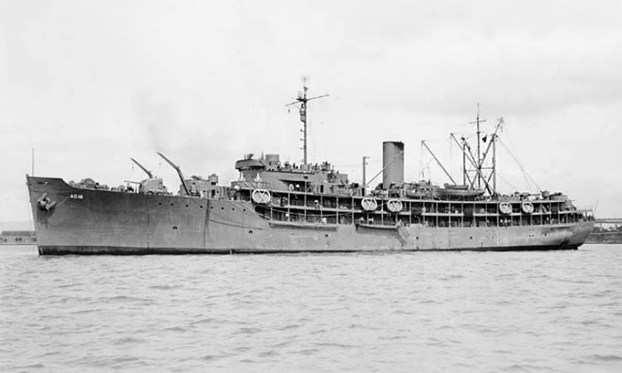 Wikipedia photo The anchor on the campus at Danville High School was taken from this Navy destroyer, the USS Cascade.

Editor’s note: Research for this article was done by Andy Bryant, a DHS graduate and genealogist, and from articles in The Advocate-Messenger Archives.

Plans for the ship’s anchor on display on Danville High School campus began in 1965 after a student and her father came up with an idea of the anchor as a school symbol and Admiral logo.

Nancy Hunt, a 1965 DHS graduate, and her father, William C. Hunt, presented their idea to his daughter’s senior class which approved it and agreed to pay for shipping charges.

A retired Army Major, Hunt corresponded with then Sen. John Sherman of Somerset to make their idea a reality. 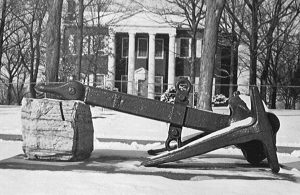 Photo contributed
The DHS anchor sits on the east side of the high school building.

The 6,000-pound anchor arrived about 10 years later from U.S.Naval base in Norfolk, Virginia.

The anchor came from the USS Cascade, the only ship of its class. It was a destroyer tender in the Navy. It was originally designed as a passenger-freighter and launched June 6, 1942, in California.

It was turned over to the Matson Navigation Co. in San Francisco, for outfitting in October 1942, and commissioned by the Navy in March 1943.

It served in World War II. Its first deployment was to Pearl Harbor, Hawaii. It later went to the Mediterranean Sea.

It was decommissioned in November 1974 and dismantled for sale.

The anchor, along with mooring cleats at the front entrance of the school, ended up at DHS.

The anchor has become a symbol of stability and security to all Danville Admirals. It keeps school spirit from drifting and stands as a constant reminder of Admiral tradition.

The anchor has been on loan from the Navy to DHS since it was placed. It was renewed in November 2013 for five years and is subject to be renewed again this month.

The school is required to send the annual inventory report with photos of the anchor to the Navy.

The school has to agree to keep the anchor on display; maintain the material in good physical condition; sign the loan agreement; report on the condition and location and provide current photos.

From our files, November 17

100 YEARS AGO — 1918 Two large automobile mail trucks are now serving the people of Danville and this section... read more