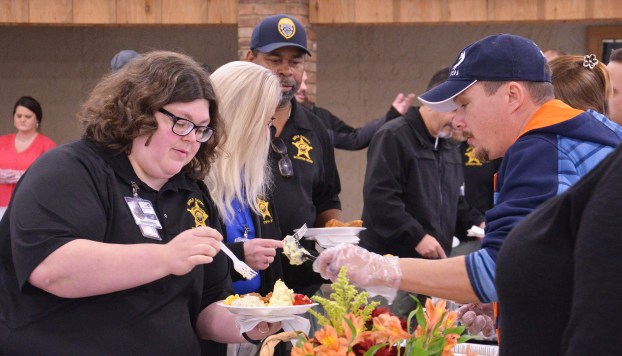 Boyle County’s first responders were treated to a special lunch Thursday as a token of gratitude for their tireless work during the current drug epidemic in the county. The lunch was primarily sponsored by Boyle County’s Hope Network and ASAP (Agency for Substance Abuse Policy.)

“Our first responders do amazing things. We know how important they are to this community,” said ASAP coordinator Kathy Miles.

This is the third year for the event. It was expanded this year to include people working in the 911 call center, the jail, emergency room, social services and juvenile justice. “It’s not just for the typical first responders,” like law enforcement and EMS she said. 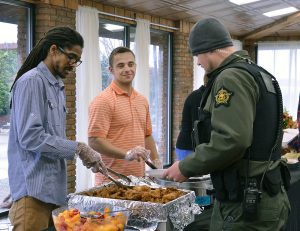 The group expected to serve and deliver more than 200 meals to officers and others working on the frontlines of the drug epidemic, Miles said.

Three years ago, Hope Network and ASAP members saw how the drug epidemic “was really wearing on our first responders,” Miles said. So the two organizations worked together to bring community members and even former drug addicts together to show appreciation for everything that they do to help our community, she explained.

Roger Fox, director of the local Shepherd’s House, a non-residential drug treatment facility, said “We’ve tried to bridge that gap,” between the former drug users and law enforcement. “We’re trying to reduce the stigma on both sides,” Fox said.

“It’s kind of a funny experience for some of them,” Fox said, describing how some of Shepherd’s House clients feel about being in the same room with officers who either arrested them or locked them up in jail.

Hilary Blevins with Shepherd’s House said, “People in uniforms make them nervous. They’re not used to being around officers and seeing them in a ‘normal’ situation.”

Aaliya Jones, of Danville, a client of Shepherd’s House. was on hand Thursday helping to serve officers as they walked through the buffet line. “I’m so grateful for today!” Jones said with a smile and tears in her eyes. “They arrested me… I deserved what I got. I was a drug addict and they were just doing their job.”

Jones said because she was arrested and given the chance to start over, “I’m nine months clean!” She’s earning her GED and will soon be getting her driver’s license.

Her friend, Brittany Morgan, a client from Lincoln County, said about the experience of serving the officers, “I don’t know how to feel. I was arrested by Danville Police and I did hold grudges.” But, she added, “They were really nice and respectful … and I’ve been clean for nine months.”

Blake Hardin, another client, was dipping out homemade baked beans. He said, “It’s good to be on this side of the table and not trying to hide from them.”

Photo by Robin Hart/robin.hart@amnews.com Boyle County Detention Center employee, Robert Coulter is served by Shawn Lopez, a client of Shepherd’s House.
You Might Like

Due to some city parks being damaged from four-wheelers, the city may place new signs explaining how the activity is... read more