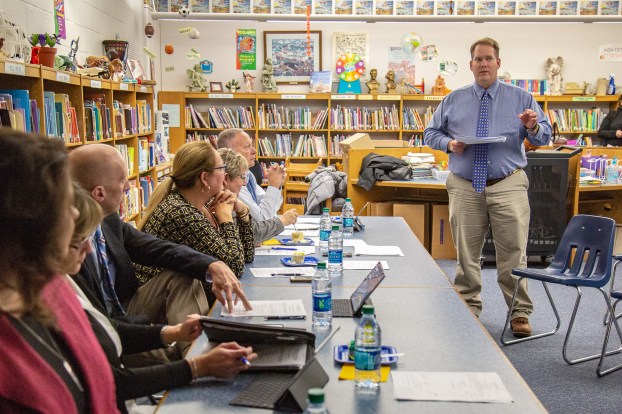 Ben Kleppinger/ben.kleppinger@amnews.com Perryville Elementary School Principal Chris Slone, right, presents an annual report on his school to members of the Boyle County Board of Education during the board's November meeting Thursday night.

Perryville Elementary School has been named a National ESEA Distinguished School, making it one of only 100 in the nation to receive the prestigious honor this year.

“Perryville has had a really big recognition — one of the biggest, maybe the biggest in the history of the school district,” Boyle Schools Superintendent Mike LaFavers said. “It’s right up there, for certain.”

The Distinguished School recognition is given out to no more than two schools in each state each year by the National Association of ESEA State Program Administrators. ESEA stands for the Elementary and Secondary Education Act, which was passed under President Lyndon Johnson as part his “War on Poverty” and created Title I federal funding for public schools that serve low-income students.

Schools that earn the Distinguished School label “demonstrate a wide array of strengths, including team approaches to teaching and learning, focused professional development opportunities for staff, individualized programs for student success and strong partnerships between the school, parents, and the community,” according to the ESEA Network. “What makes National ESEA Distinguished Schools’ stories especially powerful are the documented student achievement gains that have resulted from their collaborative and targeted efforts and innovations.”

Perryville Elementary was chosen due to “exceptional student performance for two or more consecutive years,” according to a news release from the school district.

To celebrate the honor, LaFavers announced the honor during the Boyle County Board of Education’s November meeting, held at Perryville Elementary Thursday night. Board members and attendees enjoyed cake as Perryville Principal Chris Slone gave his annual presentation to the board on his school’s educational efforts.

“We’re getting great results here — we really are,” Slone said during his presentation. “And I give 100-percent credit to our staff, our kids and our community.”

LaFavers said the work being done at Perryville to improve educational performance of students classified in “gap” groups could “be a model for the nation, really, in how to reduce gaps.”

District Finance Officer David Morris noted Perryville has also received a federal grant of $5,000 so it can send representatives to a national ESEA conference in Kansas City at the end of January, when the school will be formally recognized for its achievement.

Board members also learned Perryville won the district award for highest attendance for the month. “This is just the month of Perryville,” LaFavers said.

Gamaliel Elementary School in Monroe County was the other National ESEA Distinguished School in Kentucky. Jennifer Broadwater, communications director for Boyle Schools, said Gamaliel was chosen “for progress made in closing the achievement gap between student groups.”

LaFavers said Perryville students, teachers, staff and parents all deserve credit for helping the school become a “shining example of what can happen when everyone works together to achieve student success.”

Slone stated in a news release that, “We know these kids are special, and to have them recognized by someone else, especially on a national level, is indescribable.”

After Thursday night’s board meeting, Slone said he couldn’t be more proud of the students and school staff. “I think it’s not only reflective of a distinguished school, but a distinguished community.”

Study says Kentucky’s 50th Circuit Court has been discriminating against poor defendants, but things may be changing

Boyle County Circuit Court Judge Darren Peckler looked through the case file, then down to the attorney standing in front... read more