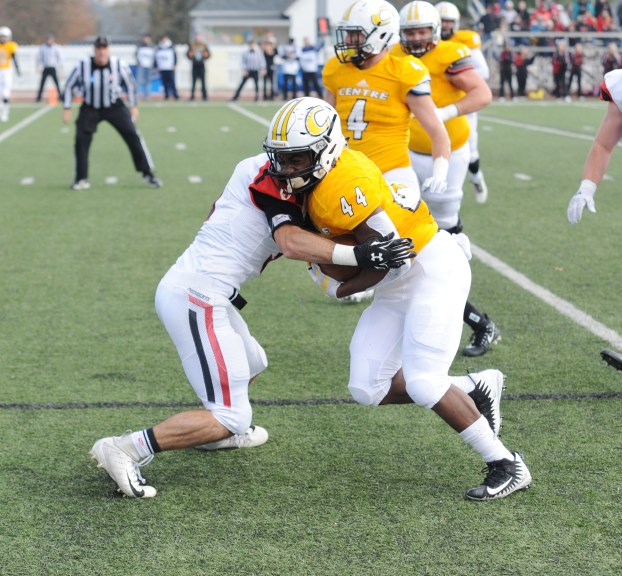 Centre pummels Presidents 54-13 in opening round of NCAA tournament

The Colonels were excellent against Washington & Jefferson, a mainstay in the D-III NCAA tournament, winning 54-13 at Farris Stadium on Saturday.

It was the 26th NCAA tournament for the Presidents, but the Colonels made sure the visitors were uncomfortable from the start of the game.

Centre’s offense was able to hit the Washington & Jefferson defense by land and by air: Running back Colin Burnam finished with 20 carries for 163 yards and three touchdowns, while Centre quarterbacks Tanner Young and John Walton combined for 352 yards and four scores.

Washington & Jefferson opened with the ball but saw the first drive of the game stall after two first downs. Centre took the ball and took over.

Cody Estep caught a 31-yard touchdown pass from Tanner Young, five minutes into the game. A Ben Logsdon 25-yard field goal and Burnam’s first touchdown run of the game gave the Colonels a 17-0 lead after one quarter.

“The offensive line, they really opened things up,” Burnam said. “We knew that we had to come out early and hit this team early in the game. We know that we can beat teams through the air or on the ground, either one. They kind of allowed us to do both, they have to respect one or the other. When they started respecting the pass, we started running the ball. The holes opened up and coach was calling the right plays.”

The Presidents would get on the board with a 16-play drive, capped by an EJ Thompson one-yard touchdown run.

But it was just five plays later that Estep and Young would hook up again, this time from 33 yards away, to again put Centre ahead by three scores. Logsdon hit another field goal — this time from 41 yards away — to give Centre a 20-point lead near halftime.

Centre had the opportunity to score again just before the half, but on their final drive of the second quarter, Young went down with a left leg injury.

Walton, a junior, stepped in and delivered a 23-yard pass to Jordan Gunter on his first play.

“Prayers up to Tanner, I don’t know what the injury is. But I hope it’s a quick recovery. I just wanted to come in and keep doing what he had been doing,” Walton said. “The gameplan was to let Trevor and Colin do their thing, and when (Washington & Jefferson) started creeping up a little bit, the O-Line did a great job and gave me time to take a couple shots down the field. Coaches calmed me down a little bit, told me to just do my job and go from there.

“I think that was the perfect first play. The defense was creeping in, they were obviously expecting a run. I pulled it and threw it to Jordan, he made a good catch. And I got hit on that play. I feel like I got a little bit of everything that play: I got to make a read, I got to complete a pass and I got hit. That helped me get into the flow of the game.”

Walton would throw an interception on the drive which allowed the Presidents to score on a 30-yard pass from Josh Burns to Jacob Adams. The point after was blocked, making the score 27-13 at halftime.

Frye said the team talk at halftime was about adversity.

“We talk about it a lot, these guys sometimes I think it’s a little running joke about adversity because I talk about it all the time,” he said. “But that’s part of the game, the game is within two hours, you’re going to experience so many emotions within that hour and a half to two hours. You go from disappointment to elation, love to hate, you can go on and on. That’s the game. How you respond to it has everything to do with how well you’ll come out. When Tanner got hurt, we say ‘attack adversity,’ and that’s what they did. You attack it by what you’ve been preparing to do. We always talk about it, our job is to teach and demand and their job is to prepare and perform.”

Centre received the ball to start the second half and promptly marched down the field in seven plays to score. Burnam capped the drive with a 39-yard touchdown run, one that Washington & Jefferson coach Mike Sirianni said was a back breaker for his team.

In the second half, Centre’s defense took over and the offense continued its stellar performance.

Washington & Jefferson finished with 45 yards of offense in the final two quarters compared to Centre’s 280. Gunter and Walton connected on a 14-yard pass, Burnam added a 5-yard run and Boyle County grad Hagen Ellis caught a two-yard touchdown pass to round out the scoring.

Defensive lineman Zach Berger, who finished with a game-high 2.5 sacks, said the halftime defensive talk was focused on limiting yards on first down.

“I think the main part that we needed to get done was limit their big yardage on first down,” he said. “They had a pretty big back and he was gashing us (in the first half). Coming out in the second half we really needed to stop them on first down and force them into second and long, third and long. Once we got that, we could dial up some pressure and I think we got to them pretty good.”

“That’s what we do every week. Our corners are really good,” Frye said. “Our wideouts will tell you, they hate going against them. But it’s made our wideouts better because Cal and John (Wilson) are real strong. When they get their hands on you, they’re really good press corners. Quite honestly, they might be the two best corners in our region, I think. Cal has been preseason All-American but John is just as good, they’ll rough and tumble you. They’re tough.”

Centre advances to the second round of the NCAA tournament, where it’ll face D-III powerhouse Mount Union, the No. 1 ranked team in the nation.

“I don’t think our guys, I think they’re just overjoyed that they get to compete against the best,” Frye said. “I want to play the best.”

BELFRY — Boyle County continues to run the gauntlet. The Rebels traveled to Belfry and beat the Pirates 41-24 behind... read more